I received this book from Netgalley in exchange for an honest review. 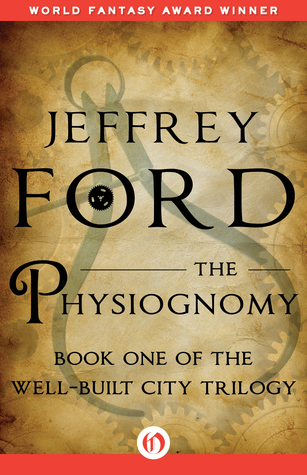 The Physiognomy by Jeffrey Ford is the first installment in the Well-Built City Trilogy. It actually won the World Fantasy Award back in the days (in 1997 if I am not mistaken so the year I was born so that’s weird).

Ford creates a world ruled by the Master who controls the country (which is nameless) from the Well-Built City thanks to his physiognomists, who are basically a mix of scientists, lawyers and police officers, that can read other persons  because of their physical features, read their past but also predicts their future.  For example if you are predisposed to stealing, you will have a diffrent appearence that if you predisposed for a career as a minister.

The story mainly focuses on Cley, a physiognomist sent as a punishment on a mission in Anamasobia, a mine far away from the Well-Built City where he has to find the stolen White Fruit of Paradise that will grant the Master immortality so that he will be able to rule the Well Built City forever. Obviously nothing is going to happen as planned and Cley will make a discovery that will shatter everything he believe in.

This book was a weird one. It has interesting view on certain subjects such as propaganda, dictatorship and religion while being filled with dark humor and cynism. I usually like those in books but I would have appreciated the book a lot more if it wasn’t as weird… The first third of the book I really liked, the world was interesting, the character of Cley wasn’t likeable but at least he was intriguing to read about. However somewhere around 40% of it the story became a lot more bizarre. It has lots of passages where you didn’t know if it was supposed to be illusions or if it was happening for real. This was due to the fact that Cley is literally often on drugs and while he’s on it he has illusions and if he has to take it, he has hallucinations or really strange dreams so, it may lost you.

At first, I didn’t mind too much but after a certain point, the book lost his interest and I was kind of forcing myself to get through it… Also the pacing of the story was a bit odd at parts (especially at the ending) and I really dislike it.

As I said before, this book has some interesting point. For example at one moment, Cley ask the Master why he hasn’t forbid religions since on a scientific point of view, he finds them useless. At this moment the Master answers that yes, they might not be relevant in a scientific way but that they are a great way to manipulate people and while people are thinking about their religion, they are not planning rebellions. I actually find this statement pretty true and thought-provoking. I feel like in those moments it was a type of dystopia that was unique to read about.

Would I recommend this to you ?

I am not going to lie, probably not except if you LOVE weird books because then, I feel like this is for you 😉

Will I continue on with the trilogy ?

No. The ending was alright but I don’t particularly care for what is going to happen. I feel like this could be read as a standalone since the ending is not cliffhanger.

Have you read this ? Do you plan to ? Please feel free to discuss in the comments bellow ! 🙂

3 thoughts on “A review of The Physiognomy by Jeffrey Ford”