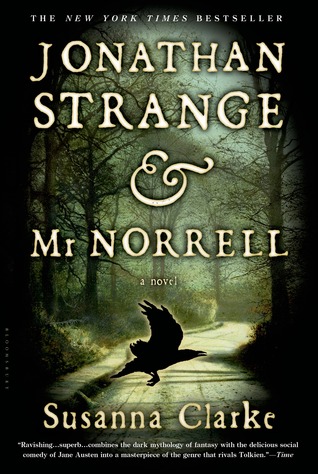 This review will probably be on the unpopular side of things.

I think that even if you have not read Jonathan Strange & Mr Norrell, you’ve heard about it. This book is on the NPR 100 list of best SFF books and it has been nominated for a ton of awards and won more than a couple of them. It has even been longlisted for the Man Booker Prize in  2004 which is incredibly rare for a fantasy novel.

In case you know nothing about it, this book is set in the early nineteenth century England and it follows two magicians, Jonathan Strange and Mr Norrell. Those two magicians are the first real ‘pratical’ magicians after more than 300 years without magic following up the disappearance of the Raven King.

I first tried to read this book back in July and I had to stop after 300 pages because I was completely bored and I had to force myself to read a couple of pages a day.  I decided to give it another chance because one of my Goodreads group decided to pick it for our January read.

At first, I decided that I wouldn’t read it but, since I am weak and I don’t like to DNF books, I started it again on the 30th of January (so yeah, I didn’t really read it with my Goodreads group…). This time, I managed to finish and I am glad for that. However I can’t say that I enjoyed it.

It was alright, some parts were good, other parts were terribly slow. This book is written like a nineteeth century novel and even if I can appreciate the effort made by Clarke, it made the story extremely dense and hard to get through.

Also, this book has footnotes.

A lot of them.

And they are freaking long.

I mean, sometimes they were interesting but mostly, they were just random anecdotes. I know, loads of people find them enchanting, funny and very intriguing. Oh well, I’m happy for them but it was really not my cup of tea.

It wasn’t a bad book, I can’t even hate it, it’s just a big meh for me. The writing style was good enough, the ending was okay, the characters were pretty interesting, the worldbuilding was solid but everything was too long. I think that it is my main problem with this book, everything was too much. A lot of  funny situations or plot points were repeated too many times or were too long and because of that, I just couldn’t fully enjoy  Jonathan Strange & Mr Norrell.
I am glad that I managed to finish it but I know for sure that I am not going to keep my copy because I really don’t see myself re-reading this in the future.