You know, sometimes you read a book and you don’t have much to say about it except a few words. Those books I don’t usually review because, I have nothing major to say about them or I just don’t know how to express my feelings toward them.

For those books, I decided to create a new category called “Mini Reviews” where, well, I am going to do mini reviews of them (hence the very original name :P). 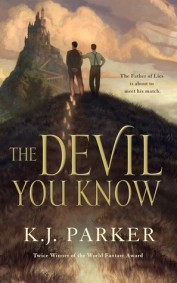 “The greatest philosopher of all time is offering to sell his soul to the Devil. All he wants is twenty more years to complete his life’s work. After that, he really doesn’t care.

But the assistant demon assigned to the case has his suspicions, because the philosopher is Saloninus–the greatest philosopher, yes, but also the greatest liar, trickster and cheat the world has yet known; the sort of man even the Father of Lies can’t trust.

He’s almost certainly up to something; but what?”

I received this book from Netgalley in exchange for an honest review.

It was my first Tor.com novella and I really enjoyed it. My main problem with novellas in general is that I don’t usually like their pacing, however, The Devil You Know was very well paced. I read this in one sitting because the flow of the story was great and nothing felt rushed.

I found the whole concept of a man deceiving an agent of Hell very intriguing and I have to say that I didn’t see the twist at the end coming at all. The funny thing is that, at the end, you feel sorry for the devil who is just “doing his job”.

Overall, I really enjoyed the story however, I can’t really rate it higher than a 3.5*, I don’t have any problem with it but I didn’t exactly fell in love with it either.

I would still really recommend this if you are looking for a nice and thought provoking quick read !

This novella is coming out the 1st of March from Tor.com 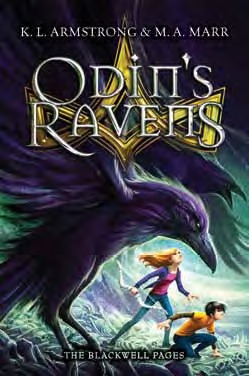 “Seven kids, Thor’s hammer, and a whole lot of Valkyries are the only things standing against the end of the world.

When thirteen-year-old Matt Thorsen, a modern day descendant of the Norse god Thor, was chosen to represent Thor in an epic battle to prevent the apocalypse he thought he knew how things would play out. Gather the descendants standing in for gods like Loki and Odin, defeat a giant serpent, and save the world. No problem, right?

But the descendants’ journey grinds to a halt when their friend and descendant Baldwin is poisoned and killed and Matt, Fen, and Laurie must travel to the Underworld in the hopes of saving him. But that’s only their first stop on their journey to reunite the challengers, find Thor’s hammer, and stop the apocalypse–a journey filled with enough tooth-and-nail battles and larger-than-life monsters to make Matt a legend in his own right.”

This was an okay book. I didn’t hate it but I have to say that some tropes used really annoyed me. For example in 90% of middle grade books, parents (or families in general) are absolutely awful people, I can understand why it’s used so much, I mean it’s probably because it allows the kids to be alone and to go on adventures by themselves, but still, it’s annoying especially when every parents are complete monsters. I feel like those kinds of books give a very bad representation of adults and, for books where the target audience is children, I don’t feel like it’s “right” to give kids the impression that adults are terrible.

I had some other problems with the book but I still enjoyed some parts of it so I will finish this trilogy (especially because I have only one book left). I am not sure I would recommend it though.

2 thoughts on “Mini Reviews: The Devil You Know and Odin’s Raven”