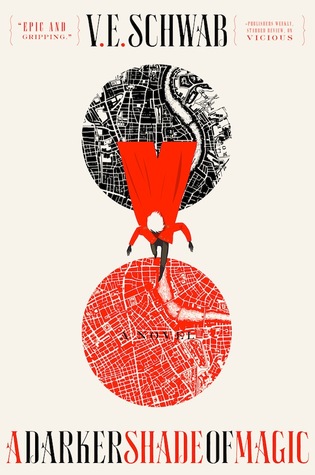 This book follows Kell, an Antari, a magician able to travel between different worlds, more specifically between different Londons set in parallel universes. Every London is unique; there is Grey London set in a world where there is no magic (pretty much like the real London), Red London, the city where Kell is from, set in world where magic is used by everyone, White London where magic has gone bad and everyone is corrupted and Black London, a London where no one is allowed to go.

Antaris are very rare and since they are the only ones capable of travelling between the Londons, they are very powerful and live like royalty in various royal courts. Basically, Kell can have everything he wants, when he wants it. Except that it’s not always enough. What is the fun in that? So, to add a little “spice” into his life, when he jumps from London to London to carry messages to kings and queens, he can’t stop himself from smuggling things. Of course, it is highly forbidden and during what may be on his last jump, he smuggles something that’s not supposed to exist. Something from Black London.

I liked this book. Actually I didn’t think that I would enjoy it at all because of the amount of hype surrounding it, but I liked it. I read it because it was nominated in the Best Novel category of the Booktube SFF awards but I had very low expectations going into it. I was pleasantly surprised but I can’t say that it’s part of my list of best books that came out last year at all.

It was a fun and quick read, that’s for sure. Some lines were pretty funny and the pacing was good, I was never bored and I  read this in two sitting in the same day. And it was a day where I had school so I didn’t have much time.

So why did I ‘just’ enjoyed it?

It was fun but it had a lot elements that I did not like. First of all, for me, it is a very tropey story, nothing felt new and it was fairly easy to guess everything that was going to happen. One of the ‘bad’ characters always kept appearing in the same places as our protaganists and the actual logic behind this wasn’t very solid. By that, I mean that the reason supposed to explain it was very mediocre in my opinion and, for me it was more of an overused plot device than anything else.

Also some scenes 100% reminded me of LoTR, like for example the different scenes where Frodo is tempted by the power of the ring and Sam tries to help him. A Darker Shade of Magic has the exact same scenes except that they were not as well written and that the object in question wasn’t a ring.

Alos, I didn’t care for the worldbuilding at all. It lacked a lot of logic, for me Schwab decided to include things in her world… because she could and she wanted to, but they did not make the whole world coherent at all, like for example the fact that all the city names London are linked, except that are not set in the same country.  You don’t have four different England but you have four different London where English is the main language. I may go to far with this example, but, Red London is set in a country (not England but I don’t actually remember the name) where people speak two languages, English and another one (again, don’t remember the name and I am too lazy to look it up haha). So people speak English in a world where England doens’t exist. Why do they call it English then?

It is just one example but really, a lot of things where completely incoherent.

There is a romance in this book and even if it happens too fast for me, it didn’t have a big part in this book, so it wasn’t a huge problem. However, I can smell a love triangle coming in the second book and I don’t like that one bit.

Finally, the ending was… completely underwhelming. It happened and then the book was over and I kept looking at my Kindle like “did Amazon forgot to send me a part of the story? What is this?”

So yeah, this book wasn’t bad but I wouldn’t recommend either. Read it if you want to, you may enjoy it more than I did.

Will I continue with this series?

I don’t know, maybe if I feel the need to read something quick and fun but I’m not sure.

Do I think that it ‘deserve’ a nomination for an award (no matter the size of the award)?

Nop. This a fun book but can it be seen as the best novel of 2015? No, no and no. At least, I certainly don’t think so. But since it was nominated for the Booktube SSF awards and that the booktube community on Youtube read a lot of YA, it doesn’t surprise me at all. I have nothing against YA but it’s just not my jam I guess.

This review turned to be a lot longer than I expected, oh well, I hope that it was midly interesting at least. 😛

5 thoughts on “A Darker Shade of Magic by V.E. Schwab”