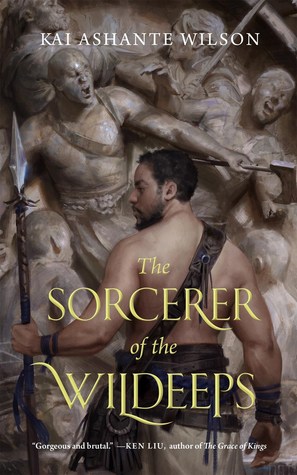 “Since leaving his homeland, the earthbound demigod Demane has been labeled a sorcerer. With his ancestors’ artifacts in hand, the Sorcerer follows the Captain, a beautiful man with song for a voice and hair that drinks the sunlight.

The two of them are the descendants of the gods who abandoned the Earth for Heaven, and they will need all the gifts those divine ancestors left to them to keep their caravan brothers alive.

The one safe road between the northern oasis and southern kingdom is stalked by a necromantic terror. Demane may have to master his wild powers and trade humanity for godhood if he is to keep his brothers and his beloved captain alive.”

I first read this novella back at the end of May and I really enjoyed it, it was a solid four stars however, everytime I wanted to write my review of it, I couldn’t do it. I can’t really explain why but I couldn’t express my feelings about it in a clear way. Anyway, I decided that I wouldn’t review it and that would be it.

However, I found myself thinking more and more about it. So much so actually, that I reread it about a month after I first read it. I am glad to say that my rating didn’t change, it’s still a solid four stars (4.5 even) and now I have a little bit more things to say about it.

This novel is extremely short (about 200 pages) and it has received a lot of critical attention when it first came out back in September 2015 but also a good amount of negative reviews from my friends on Goodreads. Of course, when everyone seems to dislike a book, I want to read it because I am noisy and I want to know why.

Well, I am glad I gave it a try because, The Sorcerer of the Wildeeps has good chances to end up on my list of Favorite Reads of the Year, it’s not perfect but it has some pretty awesome ideas and themes.

This book is a blend of science fiction and fantasy. It follows the story of Demane, a demigod whose impressive healing abilities made him famous as a sorcerer. He works in a caravane lead by the Captain, his lover and another demigod whose “voice is like a song”. Both of them must protects the caravan guards and merchants from a wizard haunting the Wildeeps, a forest full of ancient creatures.

The plot is very simple and actually quite thin. However, for me, it’s not the main focus of the book; the relationships, the themes, the prose and the structure of the novel were the main reasons I enjoyed this so much. If you are looking for the next Game of Thrones, this book is not for you. (One blurb on the back of the book compares it to GoT and really, I don’t know if the person who wrote that actually read the book, both books are in the fantasy genre, but that’s all ).

The character of Demane is incredible. He felt like a real person and I could empatize with him during the entirety of the book. He does make mistakes but they’re all understandable and overall, he just tries his best. I really enjoyed his interactions with the other characters and especially the ones with his aunt and the Captain.

This book is the definition of diverse and it doesn’t feel like it is trying to be if you know what I mean. Yes, it features two black gay male characters and women in places of power but it always feels “normal” like it should be.

This book isn’t perfect, as I said, the plot is pretty thin, the structure is a bit weird (lots of switch from present to past even in action scenes which can be a tad unsettling especially at first) and the worldbuilding is confusing. It’s there but hard to get a grasp of and I wouldn’t mind another book (or novella) set in the same world to learn a bit more about it.

However, even if it was a bit confusing, it was a submersive read, gorgeous and complex, brutal yet enchanting.

I would highly recommended to everyone because, even if you don’t enjoy it, it probably won’t leave you unmarked.

“The deeply secretive cannot grasp that protecting your secret too fiercely exposes it.”