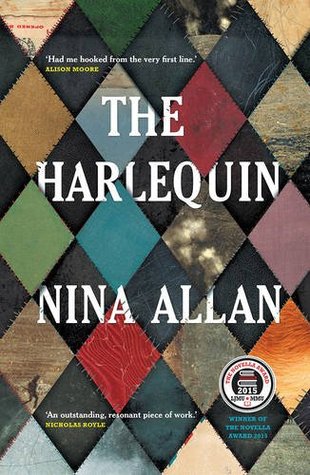 The Harlequin by Nina Allan

“The armistice is months past but the memories won’t go away. ‘A harlequin, leaning against a tree stump and with a goblet of ale clasped in one outstretched hand. Beaumont felt chilled suddenly, in spite of the fire…Most likely it was the thing’s mouth, red-lipped and fiendishly grinning, or maybe its face, which was white, expressionless, the face of a clown in full greasepaint.’ Dennis Beaumont drove an ambulance in World War One. He returns home to London, hoping to pick up his studies at Oxford and rediscover the love he once felt for his fiancee Lucy. But nothing is as it once was. Mentally scarred by his experiences in the trenches, Beaumont finds himself wandering further into darkness.

What really happened to the injured soldier he tried to save?

Who is the figure that lurks in the shadows? How much do they know of Beaumont, and the secrets he keeps?”

I first heard about this novella when I read this fantastic review of it on the From Couch To Moon blog, I was intrigued enough to add it to my Amazon wishlist and I slowly started to forget it until I read my first issue of Interzone, a speculative fiction magazine where Allan is a contributor. I read one of her essays, I don’t remember what it was about but I really liked it at the time and when I realized that it was from the woman who wrote this award-winning novella, I realized that it must be a sign from Heaven or something like that  I really needed to buy it (I don’t need much to buy books :P).

If you’re new to this blog or if you don’t read religiously every post I write, then you might not know this but, I really dislike reading synopsis. I hate being spoiled and usually, synopses are way to detailed for me so I tend to skim the first half to see if it’s something I’m intrigued by and that’s all. I also have a bad memory so usually, if I don’t start a book just after reading its synopsis (which is extremely rare), I go into it completely blind. Admittedly, it’s not always the best habit since sometimes, I can expect things that are not accurate at all and be completely disappointed by the book (a recent example of this being Bodies of Water by V.H. Leslie) but sometimes, it works and with The Harlequin, it did.

The Harlequin is set in a post-WWI England and it is the story of an ex-soldier slowly but inexorably going insane. It’s dark and twisted, it’s hard and disgusting but even if a part of you want to put the book down to see videos of cute pandas playing in the snow, you cannot stop reading. I read it in one sitting and, even though I was frowning the whole time, I didn’t stop once.

The main character, Dennis Beaumont, is not a good guy. He is pretty despicable, he cheats on his fiancée, he can’t finish his studies, he doesn’t like to talk to people (he tends to be incredibly rude to them) and he’s haunted by his memories. It was hard to relate to him but at the same time, it was hard not to.

I ended up rating it three and a half stars here and on Goodreads because I only base my ratings of my enjoyment of a story, and since the main character was a douchebag and the story was told from his perspective, my enjoyment level wasn’t very high. It doesn’t mean that it is a bad story: the writing, the atmosphere, the world and the pacing were superb and it is an extremely good novella. In The Harlequin, Nina Allan brought up really interesting discussions on gender, social changes in the 1920’s and PTSD and I highly recommend this to everyone!

6 thoughts on “Novella Review: The Harlequin by Nina Allan”