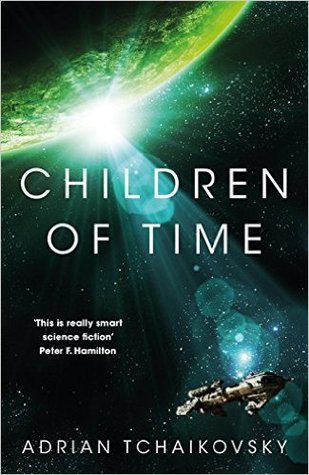 The last remnants of the human race left a dying Earth, desperate to find a new home among the stars. Following in the footsteps of their ancestors, they discover the greatest treasure of the past age—a world terraformed and prepared for human life. But all is not right in this new Eden. In the long years since the planet was abandoned, the work of its architects has borne disastrous fruit. The planet is not waiting for them, pristine and unoccupied. New masters have turned it from a refuge into mankind’s worst nightmare. Now two civilizations are on a collision course, both testing the boundaries of what they will do to survive. As the fate of humanity hangs in the balance, who are the true heirs of this new Earth?

Children of Time was the last book that I had to read to complete my personal goal of reading the entire Clarke shortlist before the winner announcement (which is tomorrow by the way). Before reading it, I read two meh books (Best Served Cold and The Dragon Engine) and because of that, when I picked it up I was like “Well book, you better be damn good” which is not always the right mind set to start a book.

However, after reading the prologue, I realized that it was exactly the right book for me which is weird because it wasn’t the book in the shortlist that I was the most looking forwatd to (hence why I read it last).

Children of Time is set in world where Earth has been destroyed by humans (because of wars and terrorist attacks)and the Human Race tries to found a new home and initiates a ton of different projects to terraform planets. Avrana Kern is a scientist working on one of those project, however, she doesn’t think that humans can be saved, she wants them to start over, from the beginning, as monkeys.

Basically, Kern and her team want to  launch monkeys on their terraformed planet and inject them with a nano-virus that is going to make them evolve faster. However, because of a terrorist attack during the launch, the shipment of monkeys is destroyed and the nano-virus is the only one to touch the planet. The virus is supposed to attack only monkeys and be completely inneficient with other mammals, but, Kern and her team don’t realize that they’re other living things on this planet that aren’t mammals, like for example, spiders. And of course, the virus works on them.

Thousands of year later, the last remnant of The Human Race living on a generation ship, The Gilgamesh, approachs Kern’s world. They don’t have anywhere else to go, Kern is their only hope but,  they aren’t the only wanting to live there.

This book was freakin’ awesome. From the start, I knew that I was going to enjoy it, the prologue was intense, if you’re interested by the book, download a sample from Amazon or go to the library and read the prologue. I’m 99% sure that you’ll want to continue on.

I really liked the way the book was structured: chapters alternate between the human crew of the Gilgamesh and the spiders on Kern which allows us to assist to the evolution or stagnation of the two races (the story spans centuries and centuries. This book could have turned into a horror story (I mean, it is dealing about giant uplifted spiders), but i didn’t. I was expecting a thriller where humans are hunted by Aragog-like huge spiders but, it’s definitely not this kind of book (fortunetely because I don’t see myself ever reading a man hunt where the hunter is an arachnid, no thanks, I wouldn’t be able to sleep after that!).

This is a book deeply centered on the idea of humanity and evolution. It asks loads of questions such as the classic :What makes us human?

However, it doesn’t ask it in a generic way if that’s makes any sense. It’s a book genuinely concerned by the actual answer.

Does our humanity come from our looks? Our brains? Our sense of selves? Our ability to create? To communicate? Is the fact that we knows that we are going to die one day?

If yes, then the spiders in this book are both human and alien, they are like us but they aren’t. How could they? They do not see the world like we do.

Is this a reason to kill them? Does our inability to understand make them useless or worse dangerous?  Do they wan’t to kill us?

I really liked this quote that really represents well the cynical tone of this book, it is a quote of a fragment of a dialogue between two humans of the ship, one of them is classicist (I’ll explain after) and the other one is the chief engineer of The Gilgamesh, they are talking about what they want for the planet and how they’re planning to deal with the spiders:

‘So we burn them out a bit, get ourselves established. Hell, maybe we can domesticate the fuckers. Maybe you can milk a spider. If the bastards are big enough, maybe we’ll be riding around on them. Or we could just poison the fucks, scrub the planet clean of them. We’re humans, Holsten. It’s what we’re good at.'”

So, I just mentionned the fact that one of the characters, Holsten is a classicist. In this book, classicists are people who study older civilizations like the Old Empire (the name used for the humans who destroyed Old Earth), they are basically the last scholars in the universe. Their profession  is looked down apon, indeed people found classicists obsolete and useless. Why would they want to study the Old Empire? If the Old Empire truly had answers, then they wouldn’t have destroyed the Earth right? It was really fascinating to read about it because it felt like something that could really happen, a reaction completely human  human.

So, to wrap up this review, I would say that Children of Time is a truly great science fiction book. The spiders weren’t anthropomorphized at all, the characters all felt human (even if some of them lacked a bit of depth), they’re all flawed but in an understandable way, the pacing was perfect (I never found myself skimming or bored) and it’s not an horror story.

I would highly recommend it and I’m glad it was shortlisted. I was on my wishlist before but, since I am not a huge fan of spiders in general, I don’t think that I would have picked it up without the extra motivation!