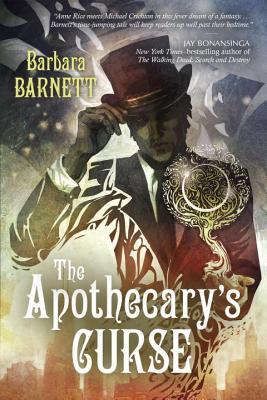 This genre-bending urban fantasy mixes alchemy and genetics as a doctor and an apothecary try to prevent a pharmaceutical company from exploiting the book that made them immortal centuries ago.

In Victorian London, the fates of physician Simon Bell and apothecary Gaelan Erceldoune entwine when Simon gives his wife an elixir created by Gaelan from an ancient manuscript. Meant to cure her cancer, it kills her. Suicidal, Simon swallows the remainder—only to find he cannot die.

Five years later, hearing rumors of a Bedlam inmate with regenerative powers like his own, Simon is shocked to discover it’s Gaelan. The two men conceal their immortality, but the only hope of reversing their condition rests with Gaelan’s missing manuscript.

When modern-day pharmaceutical company Transdiff Genomics unearths diaries describing the torture of Bedlam inmates, the company’s scientists suspect a link between Gaelan and an unnamed inmate. Gaelan and Genomics geneticist Anne Shawe are powerfully drawn to each other, and her family connection to his manuscript leads to a stunning revelation. Will it bring ruin or redemption?

I first heard about this book months ago and I was immediatly intrigued, I am not usually a fan of fantasy stories set during the Victorian era because they tend to be very steampunk heavy and I don’t particularly enjoy this genre , however The Apothecary  is different, it still manages to incorporate cool elements of magic without falling in the steampunk category.

The Apothecary’s Curse follows two main characters: Gaelan Erceldoune a mysterious apothecary working in London and his friend Dr. Simon Bell. The novel opens up when Bell runs to see his friend late in the night: he’s desesparate to find a cure for his wife Sophie who is suffering from terminal cancer and has hew hours to live. After some convincing, Erceldoune agrees to concoct a potion to save her thanks to a very old family artefact: a book supposedly written by faes of the Tuatha Dé Danann. However, the mixture is not enough to save Sophie and she dies in the arms of Bell who, in desesparation decides to drink the remaining drops of the substance to die with her. To his dismay, not only his tentative fails but he also only manages to make him immortal exactly like Erceldoune who drank an elexir from the book centuries ago to cure himself from the plague.

However, soon after, Erceldoune is accused of murder, and because of that: his house and shop are burnt and the manuscript is nowhere to be found. There begins an epic quest to find the manuscript and cure the two men of immortality.

The structure of the book is very interesting; it takes place in two very different periods: early Victorian London and modern day Chicago  The chapters switch between those two timelines: I really liked this aspect of the narration because I found that it made the book way more dynamic that it would have been told in a linear format. I did have a slight preference for the Victorian chapters because they felt richer but I still enjoyed the other ones.

The Apothecary is a debut-novel and it feels like one, it’s a very enjoyable fast-paced read but I did find that it suffered a bit from a lack of characterization, Bell and Erceldoune weren’t one dimentional per say but for immortal beings, I would have liked to see more of what they managed to learn and experience during their life. Also, I thought that the language was a bit too flowery for my liking during the Victorian chapters even though I understand that Barnett tried to make it as close to the actual Victorian way of speaking as possible.

Overall, I really enjoyed this book, it took me a while to get through (about two weeks) but that wasn’t the problem of the book since I was (and still am) in a reading slump. The fact that I actually managed to finish it is a pretty good sign.

I will definitely give her other works a try in the future because I’m sure they will improve and I’m always on the hunt for quick and fun adventures !

I received a copy of this book through Netgalley. My Thanks to the SFWA and Pyr. All opinions are my own.

8 thoughts on “Book Review: The Apothecary’s Curse by Barbara Barnett”