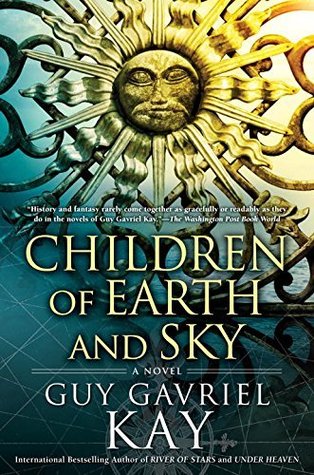 From the small coastal town of Senjan, notorious for its pirates, a young woman sets out to find vengeance for her lost family. That same spring, from the wealthy city-state of Seressa, famous for its canals and lagoon, come two very different people: a young artist traveling to the dangerous east to paint the grand khalif at his request—and possibly to do more—and a fiercely intelligent, angry woman, posing as a doctor’s wife, but sent by Seressa as a spy.

The trading ship that carries them is commanded by the accomplished younger son of a merchant family, ambivalent about the life he’s been born to live. And farther east a boy trains to become a soldier in the elite infantry of the khalif—to win glory in the war everyone knows is coming.

As these lives entwine, their fates—and those of many others—will hang in the balance, when the khalif sends out his massive army to take the great fortress that is the gateway to the western world…

Is it even possible to make a synopsis of this book without spoiling everything? I am usually terrible at synopsis but Children of Earth and Sky doesn’t make it easier.  Since it’s a character driven story that moved pretty slowly, some important events mentionned in a ton of reviews I tend to find a bit spoilery. I actually wouldn’t recommend the synopsis before reading it because I do think that it tells us a little too much about the plot. If you never heard about this book before, Children of Earth and Sky is a alternate fantasy-ish historical novel set in a world that is very similar from fiftheen century Earth. It is mostly set in alternates versions of Croatia, Venice and Constantinople.

The story follows about five main characters but it also features some other POVs that allows us to observe and learn about wider part of the world. I won’t talk about all of them because I think that it a great experience to meet them throughout the story so I’ll just mention my favorites: Danica, a woman form Senjan who lost almost her entire family to a Asharite raid when she was younger and who know wants to avenge herself and Pero Vilani,a painter engaged to paint a portrait of the Grand Khalif of Asharias while spying on him. I really enjoyed their perspective and I tended to like a little more their parts however, the other ones were interesting too, I never found myself bored or skim-reading  (which for a book following an important number of characters is a very good sign). I really liked the facts that all the characters were flawed in a very human way, they were all multidimensional and very unique and I really wished that I could spend a more time with them: I read the ending very slowly because I didn’t want to let them go!

Children of Earth and Sky is my first Kay book and it won’t be the last, I envoyed it so much in fact that I added five other Kay books on my TBR while reading: Sailing to Sarantium, A Song for Arbonne, The Summer Tree, Tigana and Under Heaven. The writing in this book was gorgeous: very detailed and intricate yet not flowery. I found that sometimes with only one sentence, he managed to explain or show things way better and efficiently than most writers out there. You don’t need to use pages and pages to describe an action when a sentence can replace it: it’s not as powerful because it doesn’t affect you the same way and it can easily become boring.

Another thing that I very much enjoyed was how I could tell that Kay had done an unimaginable amount of research, the world felt real and I know that it might have been helped by the fact that this book (even if it is a standalone novel) is set in the same world as some of his other novels like Sailing to Sarantium, but we could tell that this world was surrounded by history. Some people might say that’s because Kay heavily inspire himself of real history. However, I don’t think that it is that much easier to rely on actual history that create your own since people do know the real one and you can’t really mess it up unnoticed.

Even though I enjoyed this book a great deal, I couldn’t give it a full five stars because I had a bit an issue with the pacing. I don’t know if it’s the case with every book by this author but the pacing was extremely weird. As I said before, the book followed a good number of characters, however, some of them that were very important for the story at the beginning then disappeared for most of the book to reappear just before the end. Also, sometimes, the same scenes were told first from one character perspective and then another character. I’m sure it’s to show how a sama event can affect people differently but I found it a bit odd when it happened. Furthermore, Kay could spent pages and pages talking about an event and then, only one paragraph to talk about the life of a character just after that which I found a bit jarring. They were small issues overall but still, they bothered me enough to make this book a really good read and not a great one.

If you’re intrigued by this book, you should definitely give it a try! I personally think that I need to be in the mood for those type of very intricate and detailed reads. Indeed, I really enjoy them but if you want to really take everything in, you have to slow down your reading to really get the full experience. I read this after Kushiel’s Mercy by Jacqueline Carey which is another (great) historical fantasy book. They are not written in the same style but they both have fascinating worldbuilding and great character. When I finished Carey’s work I looked at the books in my To Read Next collection on my Kindle and I remembered that I still haven’t read this book that I received probably back in April from the publisher and I happened to be in the right mindset for it. I think that I really read it at the right time, I don’t know about you but I am often like to read big historical fantasy books during fall and this one fitted my mood perfectly.

I received a copy from Netgalley in exchange for an honest review. All opinions are my own.

10 thoughts on “Book Review: Children of Earth and Sky by Guy Gavriel Kay”