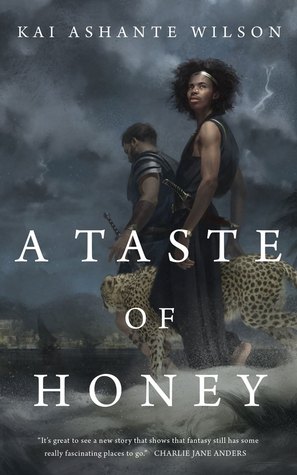 “Long after the Towers left the world but before the dragons came to Daluça, the emperor brought his delegation of gods and diplomats to Olorum. As the royalty negotiates over trade routes and public services, the divinity seeks arcane assistance among the local gods.

Aqib bgm Sadiqi, fourth-cousin to the royal family and son of the Master of Beasts, has more mortal and pressing concerns. His heart has been captured for the first time by a handsome Daluçan soldier named Lucrio. in defiance of Saintly Canon, gossiping servants, and the furious disapproval of his father and brother, Aqib finds himself swept up in a whirlwind romance. But neither Aqib nor Lucrio know whether their love can survive all the hardships the world has to throw at them.”

A Taste of Honey was one of my most anticipated releases of this year and as with all Wilson’s works, it didn’t disappoint. I discovered Kai’s fiction this year with Kaiju maximus®: “So Various, So Beautiful, So New” that I really enjoyed because how different it presented the trope of the hero protecting a vulnerable family. I then inhale read The Sorcerer of the Wildeeps that I since re-read (because it’s amazing). There again, the force of Kai Ashante Wilson is that he uses well-known tropes but turn them upside down to write what matters to him, which is, in The Sorcerer , the representation of a queer couple and their difficulties living in a world that doesn’t accept them. It’s also the recurring theme of A Taste of Honey.  A couple of months ago, I read The Devil in America and this is one of my all time favorite short story, if fighting against discrimation and racism is important to you (and I hope it is!), this will move you. The ending of this story is phenomenal and it left me in tears. You can read it for free here and please do!

All this to say, that when I learnt that Wilson was publishing another work, I was pumped. I had very high expectations and I was bit scared to be disappointed but I really, really enjoyed A Taste of Honey. It is set in the same world as The Sorcerer but the stories aren’t linked in any way (or at least, I didn’t see any connection between the two), I really liked going back into this world that is an amazing blend of science fiction and fantasy. I enjoyed it so much in fact that I read this in one sitting and that’s extremely rare for me because I don’t like to read for more than one hour straight.

Kai’s prose is very straightforward yet beautiful. It punches you in the feels very regularly and doesn’t let you go. I couldn’t put my Kindle down because I HAD to know what was going to happen. As usual, Wilson doesn’t write in a linear way at all, but, if this is something that tends to annoy you, I would still recommend it. I am not a big fan of let’s jump back and forth between years but it works well here.

I mentionned before that Wilson tends to use well known tropes in his stories and that’s also the case in this. It follows a forbidden love story between Aqib, a member of the Olurum family, and Lucreo, a Daluçan soldier and its consequences on both of them. That’s not a particularly new idea, however, of course, it’s so much more here. I won’t tell you why because you do need read it and discover this story for yourself !;)

I realize that this review is pretty fangirly but, what can I say, I love this author, so far he didn’t manage to disappoint me (which is a hard thing to do) and I really can’t wait to read everything he has (and will) ever write !

Do I recommend this ? Of course !

I received this book from Netgalley in exchange for an honest review. All opinions above are mine.

6 thoughts on “Book Review: A Taste of Honey by Kai Ashante Wilson”