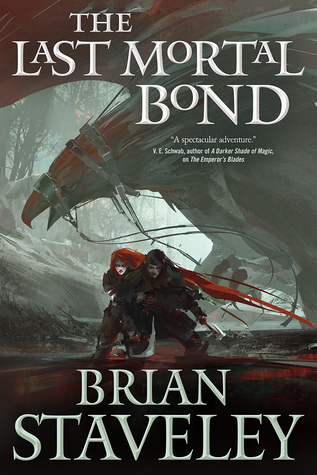 The ancient Csestriim are back to finish their purge of humanity; armies march against the capital; leaches, solitary beings who draw power from the natural world to fuel their extraordinary abilities, maneuver on all sides to affect the outcome of the war; and capricious gods walk the earth in human guise with agendas of their own.

But the three imperial siblings at the heart of it all–Valyn, Adare, and Kaden–come to understand that even if they survive the holocaust unleashed on their world, there may be no reconciling their conflicting visions of the future.

Well, this book was epic.

The Last Mortal Bond was one, if not my most, anticipated releases of the year. I loved the previous installements in this trilogy: The Emperor’s Blades was a great introduction to the the three imperial siblings Kaden, Valyn and Adare and The Providence of Fire really managed to expand the universe and the story to an another level.

I tend to be very picky with trilogies ending especially when they concern my favorite series (like the Red Rising trilogy, Hunger Games etc.) and I have to say that I didn’t really think that The Last Mortal Bond managed to accomplish what I was expecting. I am overall pretty happy with the ending ( even if it was way more dark than what I expected!) but I had some issues with the pacing.

Indeed, this book was more than 600pages long and I felt like almost nothing really happened in the first third and then that the second third was still incredibly slow. I like slow paced books but not that much when in it’s the last book in a series. I prefer when authors start tying up loose end before the last chapter otherwise, I usually feels way too rushed and almost messy.

Basically, up until the 90 %, it was total chaos and for me, only the last 20 pages really did something for the plot and the characters. Because of that, I felt like the whole action/resolution was done a little too fast which was a bit underwhelming. I am not going to spoil anything but I wasn’t pleased whith the whole Balendin storyline and I found the last action too easy, almost Tolkien’s eagles-like if you know what I mean.

Don’t get me wrong, I loved being back in this word and I’m glad that Staveley is going to write other book in this exciting universe he created (I can’t wait for Skullsworn!). I really liked reading about Valyn (which is totally my favorite character in this trilogy) and Gwenna which is probably my second favorite one. Kaden’s character development was very strong and I especially liked to see him at the end of the book. He’s the strongest character of the series in my opinion. I didn’t like reading Adare’s chapter that much but that’s not new because, since what happened at the end of The Providence of Fire I really couldn’t bear her but I had to admit that she grew a lot during this and I can actually understand why she did some of the things I can’t forgive her about.:P

Even if The Last Mortal Bond wasn’t as good as the other books in the trilogy in my opinion, I would still recommend the Chronicle of the Unhewn Throne. It has some very unique elements, it’s very addictive and since my expectations were so high, I guess that it was very hard to meet them !