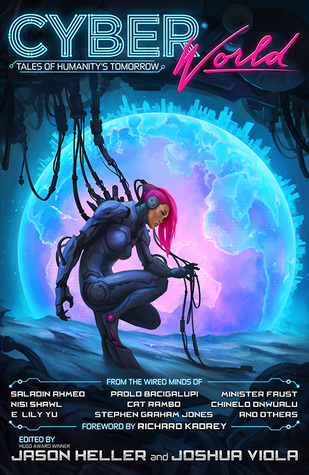 Cybernetics. Neuroscience. Nanotechnology. Genetic engineering. Hacktivism. Transhumanism. The world of tomorrow is already here, and the technological changes we all face have inspired a new wave of stories to address our fears, hopes, dreams, and desires as Homo sapiens evolve—or not—into their next incarnation. Cyber World presents diverse tales of humanity’s tomorrow, as told by some of today’s most gripping science fiction visionaries.

I have interested by this anthology for a while, I don’t read a lot of cyberpunk but I like reading this genre and I was curious to encounter some new authors I would like. Also, the fact that both Alyssa Wong and Paolo Bacigalupi contributed to this anthology was a bonus for me.

Overall, it was a strong anthologies, as always with those types of books they were hits and misses, I DNF’d a couple of stories that didn’t work for me (mostly because they confused me too much) but other stories such as Reactions by Mario Acevado, The Bees of Kiribati by Warren Hammond,  Panic City by Madeleine Ashby,  Your Bones Will be Unknown by Alyssa Wong, Other People’s Thoughts by Chinelo Onwualu,  A Song Transmuted by Sarah Pinske, It’s Only Words by Keith Ferrell and Small Offerings by Paolo Bacigalupi were extremely good.

All the stories were short and very different from one another which was great because I never felt bored. I flew through this collection in two days and I liked the broad selection of themes it tried to tackle. Some of the most recurring themes were family, pregnancy, gender and gender fluidity, information and body’s transformation.

I would absolutely recommend this anthology even if you’re not a fan of cyperpunk or short fiction because I tryuly believe thatCyber World: Tale of Humanity’s Tomorrow contains something for everyone!

This story follows Anj, a young techgirl who has to access certain files that may be very important for one of her clients. In this future, most of the files are protected by Ais which means that you have to “confront” them to access the info contained in an AI-USB. This story wasn’t particularly unique but it was pretty bittersweet which I liked and it was dealing with issues such as grief, letting go and growing up that are always interesting to read about

First sentence: “Anj was in the shop late at night on Thursday when the new client walked in.”

This story was previously published on the Tor.com website so this was a reread for me. I didn’t like it as much after rereading it because even though, it is fairly unique, it’s hard to understand. It follows Timofeya Phin, a woman who has been uploaded into an AI. We soon learn that the AI is losing some of the files and while it tries to hides it, weird things start happening in Timofeya’s life. I guess that it was mostly about loveand gender fluidity but it was pretty confusing. It was very hard to relate to the characters, I really couldn’t care less about them. I don’t really like Shawl’s short fiction which is why I’m pretty hesitant about reading her debut-novel Everfair that came out this year…

First paragraph: “Timofeya Phin glared at her bare brown hands. They were hers, all right. They looked the same as the orginals. Unlike her feet.”

One of my favorite story in this anthology, this story follows the aftermath of war on a young soldier. It deals with PTSD, grief and love. It was very powerful and I really like the voice of the main character. I will be looking out for more of Acevado’s works!

Another really good one, it was pretty creepy and once I started reading, I couldn’t stop. I don’t want to say too much about this one but I don’t think I ever read a story about surrogate mothers and refugees as powerful as this one. The ending was really impressive!

First sentence: “I spotted Detective Inspector Keo at the end of the corridor, his back against the wall, smoke snaking from the cigarette lodged between his fingertips.”

This story was very promising at the beginning and as much as it had interesting themes (dealing with an oppresive family, being different etc..) it felt a little flat toward the end. it didn’t really had a plot except the fact that the main character hates her mother and it was pretty meh overall.

First sentence: “I kill my mother.”

The Singularity is in Your Hair – Mathew Kressel ★★★

This one was a weird one, most of the story is set in a virtual reality where our main character works for an AI who promises to upload her on  a server when she dies and in exchange, she has to program all kind of things. In “real life”, the main character is suffering from Emery-Dreifuss muscular dystophy which means that she can’t leave her wheelchair and that she only has a few years left to live. With an premise like that, I really expected to story to make more of an impact on me and, sadly, it didn’t…

This is one is pretty unique since the main PoV of the story is… a city. And this city doesn’t want anybody to go in… or out.

First sentence: “Devoured by the blades of Fan Six, high above the Service Sector quadrant of the city and suspended over her many rings, something went still and cold.”

This story is about a soldier who wants to find a cure for his wife illness, since leaving the army, he still receives prompted with instructions and some of them may be the key of his wife illness. I think that the concept could have been pushed farther but it was interesting and different from the overall tone of the anthology.

First sentence: “If I die on this piece-of-shit road, Lubna’s chances die with me.”

One of the main reason I was intrigued by this anthology was that it contained an Alyssa Wong story. Following a young assassin infiltrating a crime lords meeting, the story was pretty intense.. and gory. I mean we are talking Alyssa Wong here. As usual with this lady, the story is gripping and well-written.

First sentence: “I stuck close to the wall and let my corneal camera watch the action for me.”

Sadly, this was a DNF for me, I was very confused while reading and I couldn’t get what was going on so I decided to drop it.

First Sentence: “The Hackney Kid’s kidneys go into shutdown on our way out Gunchester.”

This story doesn’t really has a plot but I really liked it, it follows a girl who was designed by her mother to feel other people’s thoughts and feelings and her relationship with a mysterious customer. I really liked the writings and the ideas and since I never heard of Onwualu before, I’m glad that I discovered her voice!

First sentence: “Zayin walked into my shop on the morning of my twenty-ninth birthday.”

Another DNF, I might be dumb but this one made no sense to me whatsoever, I think that I only read three pages and then I was “Maryam’s out”! I don’t know if I should try this story again in the future but I’m in to rush to.

First sentence: “Bartolomeu used to puppeter ants and then he went to singU and now he builds furniture out of bugs but a few things happened in between”.

Political SF’s story are pretty rare because I’m pretty sure that they’re hard to do well (build a logic political world, adversaries and all for a short story might be a bit of a pain) but We Will Take Care of Our Own was fascinating. It reminded me a bit of Infomocracy and Minority Report and it was dealing with really complex themes like artificial intelligence and conciousness with a refreshing simplicity.

First Sentence:”Senator Tia Isandro stepped out of the Lincoln’s back seat.”

A cyperpunk story dealing with music? Oh yes. This was very well done, I am usually a big fan of stories with music eements in them and this one did it wonderfully well! It follows a young girl who loves playing music and her journey to make her body a music instrument. Really good.

First paragraph: “I was a fussy baby. The only thing that quited me was my great-grandfather’s piano. My parents placed my bassinet directly on the piano, with noise-cancelling headphones to keep from damaging my ears. His chords came up through the instrument, up through my bones.”That child is full of music, I’m telling you,” he told anyone who listened.”

Another great one, it follows the idea that in a near future, everyone is going to be linked “tapped” to Internet thanks to an implant. Our main protagonist, Sem, isn’t and we follow him as he’s writing a school assignment explainign why he doesn’t want to have this implant.

I previously mentionned that one of the reason I was interested by this anthology was the Wong story, Bacigalupi is another. I only read one of his short stories before City of Ash but I loved The Water Knife and I was excited to give his short works another try. Small Offerings reached and surpassed my expectations quite a bit, i’s depresssing as hell and if reading about horrible pregnancy and dead babies is something that you can’t stand, well do not read this. I personally found it fascinating and creepy but extremely well done.

First Sentence:”Readouts glow blue on driplines where they burrow into Maya Ong’s spine.”

Set in a society where everyone can observe other people’s life, it’s not suprising that, our “hero” Brandon isan unreliable self-centered douche bag. However, as much as I didn’t like Brandon, I like Yu’s commentary on what may be the future of our society.

First Sentence: “In all of Northchester, Pennsylvania there was hardly forty square feet that was not continuously exposed to public view, on glass walls if you had money or on tablets if you were poor.”

I was a bit confused by this one but it has similarities with the first story of this collection, Serenade, because the main character is kind of fighting against an AI. I can’t say much more about this one.

First Sentence: “If it were 2028 or something Dark Ages like that, what Mark had just asked for after casing the place, it would-no, it still wouldn’t make sense.”

The Ibex on the Day of Extinction – Minister Faust ★★★

This story follows the aftermath of a regional evacuation. Because of his work, our main character had not way to know that his family was evacuated and he tries to find them, wandering Niger. I liked this story when I read it but I have to admit that it was pretty forgettable in the sense that I had to reread a large portion of it to write this tiny synopsis…

How Nothing Happens – Darin Bradley ★

I remember finishing this story and rereading the last paragraph to see if I missed something. It follows a main character that takes notes but who may have come from the future.. Maybe ?

First Sentence: “It’s strange to listen in, knowing at once nothing and everything about the discussion.”

I received a copy of this book through Netgalley in exhange for an honest review.