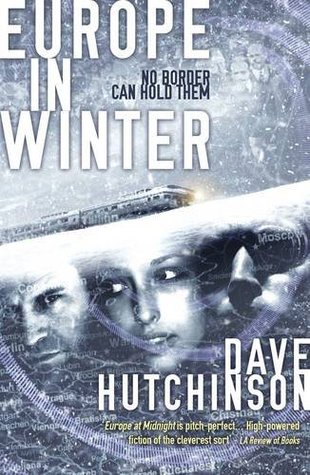 “Rudi, the former chef-turned-spy, returns on a mission to uncover the truth—in a fractured Europe utterly changed by the public unveiling of the Community.

Union has been forged and the Community is now the largest nation in Europe; trains run there from as far afield as London and Prague. It is an era of unprecedented peace and prosperity. So what is the reason for a huge terrorist outrage? Why do the Community and Europe meet in secret, exchanging hostages? And who are Les Coureurs des Bois? Along with a motley crew of strays and mafiosi and sleeper agents, Rudi sets out to answer these questions—only to discover that the truth lies both closer to home and farther away than anyone could imagine.”

The Fractured Europe Sequence is one of the most relevant series of all time. I devoured the first two installement of this series at the beginning of the year and I was highly anticipating the continuation (or ending ?) of this series. Europe in Winter did not disappoint. As much as Europe at Midnight was an extremely loose sequel to Europe in Autumn (it did not follow the same characters and the story did not take place in the same countries), Europe in Winter is a perfect balance of the two, we have the pleasure to reacquaint ourselves with Rudy, the main protagonist of the first installment. I didn’t realize how much I missed his perspective until I followed his adventures again.

It’s very difficult to put this series in any genre, it has a bit of sci-fi (with the parallel universe), a bit of a spy thriller novel (the main character Rudy is a Coureur des Bois, a member of an organization which transport mysterious packages across borders) but it’s also very much a commentary on European politics. I mean you could read this only for the enjoyment level and you would still like it but once you start digging a little, you realize that this definitely not a James Bond book. In The Fractured Europe Sequence, espionnage isn’t very sexy, the research is tedious and takes years and our main character is a middle aged and ordinary looking man who walks with a cane.

The whole idea of this series is based on two facts. First of all, because of a disease, the European Union has imploded in a multitude of small countries, new borders are created everyday and power is the ability to travel across them and it is reserved to few people (as power usually is). In this context, being a part of Les Coureurs des Bois is wonderful opportunity for anyone who wish for freedom.

The second fact is that, centuries ago, an English family has managed to slowly build the Community, a kind of alternate Europe where they don’t have to deal with other countries that they consider dangerous. Of course, because of different things explored in the first two books, it doesn’t really work the way they wanted and they are discovered by other countries

As much as the similarities between the Community and England are obvious, Hutchinson manages to quitely craft a Cold War II type of a setting. Indeed the Community is a nuclear power and they don’t want to have any types of relations with the barely hold-together Europe.  However, even though no visible power is there to fund European countries, odd structures, such as The Line, a huge railway that allows its citizen to travel all the way across the former Europe, still manage to exist. But who provides the money ?

The first book of this series was published in 2014 when Brexit was only an idea and now that the UK are planning to leave the EU, it’s pretty scary to see how this book managed to create a big “what if” scenario that doesn’t seem to science-fictioney anymore(parallel universe set aside..).

I actually don’t know if this last installment is the end of trilogy or if we are going to be able to read more books set in this universe (as always with Hutchinson, his endings are pretty vague, you could read Europe in Autumn as a standalone ), I could live with Europe in Winter being the end, this could be a frankly genius trilogy as it is but I am definitely on board for more, and, if a sequel is coming, I will read it the second it’s available.

3 thoughts on “Book Review: Europe in Winter by Dave Hutchinson”