I mentionned in my last post that I watched Rogue One recently, I completely fell in love with this movie (I think I might see it again next week actually because I’m obsessed), and, because of that, I rewatched all the other seven movies and it put in me in the mood for everything Star Wars related.

So, because I needed some more Rogue One in my life, I decided to pick up the prequel book written by James Lucreno to have a bit of background and since I read Aftermath: Life Debt by Wending recently, I decided to do a little Star Wars book reviews combo.

Let’s start with the one I didn’t like shall we ? 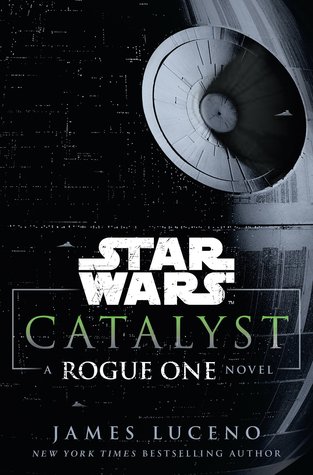 I knew before going into this that it wasn’t going to action packed but since it was focused on Galen and Lyra Erso, Jyn’s  (the main character of Rogue One) parents, I thought it was going to give me some insights on the characters and the story.

I mean, I don’t know much more about Jyn’s parents now than after watching Rogue One. The story is centered on the creation of the Death Star and how Jyn’s dad, Galen, became involved in it. It could have been interesting it hadn’t been as repetitive, if you watched Rogue One, you know right at the beginning that Galen doesn’t want to be a part of the project (since he ran away from Coruscant with his family to hide in a distant planet). During the entire book, you basically learn how he was manipulated to work on this project by Orson Krennic, an ambitious and pretentious engineer that would like to benefit from Erso’s genius.  And I mean, that’s the only thing that happens during almost 400 pages.

Yes, we did learn a couple of things about how the Death Star worked, the parts about the kyber cristals were interesting enough but the book could have been summarized in 10 pages (including the parts on the kybers). I think that it should have been a short story, a novella at most but nothing more because it dragged a lot. I guess I just like my Star Wars fiction to be more action-packed or at least to have really interesting characters interactions, we’ll get to that part in a minute.

So, would I recommend Catalyst? Nop. It’s not awful and if you really want to learn more things about Rogue One, it will allow you to recognize one or two Easter eggs in the movie but that’s about it. 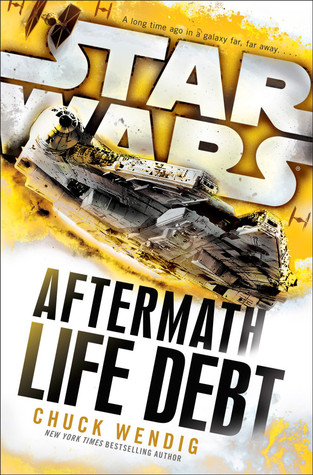 I read the first book Aftermath a couple of months ago, I had a few problems with it but it was enjoyable enough for me to give its sequel, Life Debt, a try.

Well, I’m happy I did, Life Debt was pleasantly better than the first book! I had a few problems with Aftermath, the writing felt a bit all over the place, I didn’t feel a connection to the characters and overall, I found it to be a bit confusing which was weird since the plot was very simple.

Life Debt was a real improvement, first of all, in this one, we had the pleasure to have Leia Organa and Han Solo (and Chewie!) as characters and even though they weren’t the main characters, they really added something to the book. Indeed, even if I like following the adventure of Norra Wexley crew in Aftermath, the plot felt a bit disconnected to the big picture and having a few “important characters” in Life Debt managed to link what was happening to the movies and it was really nice. Also, in this installement, the characters relationships were stronger than in the first book and by the end of it, I found myself rooting for the entire team.

My favorite characters remains Sinjir, an ex-Imperial officers who has the best sense of humor and Jas, a bounty-hunter that may not be as heartless as she thinks, she has a bit of a Han Solo character and this is probably one of the reason I like her so much.

The plot of Life Debt was really interesting and I liked the fact that this series is finally starting to look like a bridge between The Return of the Jedi and The Force Awakens (the first book was marketed as such and didn’t deliver in my opinion).

I would highly recommend all the people who have read Aftermath and thought it was mediocre to give Life Debt a shot because, it was a really enjoyable read!