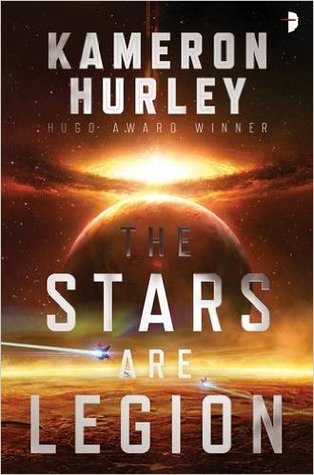 Set within a system of decaying world-ships travelling through deep space, this breakout novel of epic science fiction follows a pair of sisters who must wrest control of their war-torn legion of worlds—and may have to destroy everything they know in order to survive.

On the outer rim of the universe, a galactic war has been waged for centuries upon hundreds of world-ships. But these worlds will continue to die through decay and constant war unless a desperate plan succeeds.

Anat, leader of the Katazyrna world-ship and the most fearsome raiding force on the Outer Rim, wants peace. To do so she offers the hand of her daughter, Jayd, to her rival. Jayd has dreamed about leading her mother’s armies to victory her whole life—but she has a unique ability, and that makes her leverage, not a leader. As Anat convinces her to spend the rest of her life wed to her family’s greatest enemy, it is up to Jayd’s sister Zan—with no stomach for war—to lead the cast off warriors she has banded together to victory and rescue Jayd. But the war does not go at all as planned…

I think The Stars are Legion is going to be a very polarizing book. It was one of my most anticipated releases of 2016 but then it was pushed back to 2017 and because of the wait, I think I might have expected too much of this book. I personally have extremely mixed thoughts on this novel, I mean, some aspects are frankly brilliant but in other areas, this book is lacking some precious elements.

This is a hard book to summarize because when it opens, it follows Zayn, a character who has lost her memories and no one wants to explain what happened to her and who she is, even the ones that claim to be her family won’t answer her questions. Because of that, during the first part of the book, Zayn is very confused and since we are almost only reading from her perspective at the beginning, it’s very hard to understand what’s going on. Indeed, when Zay wakes, the only thing that she’s told is that she has to conquer a planet called  Mokshi that basically managed to escape the laws of physics.  This planet has stop orbiting around the sun and can fly anywhere in the galaxy and this is disturbing the fragile balance of the Legion, th alliance of planets where humans can live. Zayn doesn’t know why she’s the only person who can access this planet, but everyone but her die when they are near this planet and  it makes her the only person who can save the Legion.

The first third of the book was very confusing to me because Hurley was holding back on a ton of information that were vital to the comprehension of the story. The characters were always repeating the same info over and over and we didn’t have any access to new things that could have allowed us to understand what was going on. I personally don’t like when authors do that because it’s hard to get a grasp on the story, it feels like the author doesn’t want you to know too much because it could ruin the surprise.

However, after the first third, some things were revealed and it made the reading way more interesting because suddendly, we could kind of understand how the world worked and how it influenced the story and the characters.

I had some issues with the plot which was for me overly complicated, indeed I found the story to be pretty straightforward and simple, if I had to synopsize the entire thing, it would be very short. However, the structure of the book turned a simple story in a way too complicated thing and I don’t really get why. In my opinion, this story would have worked better as a novella, it would have solved the problems I had with the pacing and the structure of the novel.

However, I have to say that some things were done really well in this book. First of all, my favorite thing about the book was the worldbuilding. The world Hurley created in The Stars are Legion is very original and inventive and it was fascinating to see how it worked. Indeed, all the planets are alive, they are organic living things which means that they can have diseases and that the humans living on them are tools for their survival. The Stars are Legion is book where all the characters are female and where sex and reproduction are two very different things. All the women living on the organic planets keep on getting pregnant and giving birth to things useful to the world they live on and giving birth to actual humans is a very rare and precious gift. This aspect was very unique, it was a fascinating experience to imagine humans living inside another organism made from the same matter as them. In one scene, Zayn repairs an organic vehicule using the guts of a dead woman ( this book doesn’t hold back on how bloody it is so if you don’t have a strong stomach, I won’t recommend this one to you) and I found this aspect very interesting, this idea that planets are like bodies and that all its components are just cells that allows the whole thing to work.

So, even if my opinions are mixed, I would recommend this book if only for the characters, the worldbuilding and all the interesting things Hurley has to say about gender, love and betrayal.

I received a copy from Netgalley in exchange for an honest review. My thanks to Angry Robot Publishing.

8 thoughts on “Book Review: The Stars are Legion by Kameron Hurley”