I know we are near the middle of the month but I still want to mention a few titles that are coming out this month and that I am very intrigued about! 🙂

This short story collection about djins has an amazing line-up, I mean Neil Gaiman, Nnedi Okorafor, Amal El-Mohtar, Usman Malik, Claire North to quote just a few. I was actually tempted to request it on Netgalley but even though I love reading short story collections, I really dislike reviewing them and since I am very lazy I know I am probably going to read it without doing an extremely detailed review.

Another short story collection. I haven’t read any Bracken MacLeod even if I heard good things about his books but since I much prefer to read horror in a short format, I think this collection would be a good way to give his works a shot! 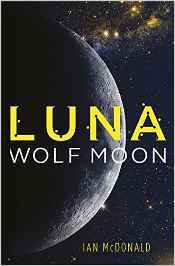 The Wanderers by Meg Howrey (March 14, G.P. Putnam’s Sons)
This book follows an astronaut crew preparing for a journey to Mars. I like the fact that it sounds very focused on the psychologival aspects of this type of mission and so far, I have only seen positive reviews.

I already have mixed feelings about this book, I mean I tend to love climate fiction and I really want to see KSR visions of the future. The idea of New York being under water is really interesting and I want to see how he is going to use the setting for his story. However, I finished Aurora a few days ago and I really didn’t like it so I am a bit afraid to give his other works a try.

Luna: Wolf Moon by Ian McDonald (March 28, Gollancz)
This book was supposed to come out last year but it was pushed back and it is finally coming out! It is the sequel to Luna: New Moon a fascinating and bloody family saga set on the Moon. I already read Wolf Moon at the beginning of this month as an ARC and I highly recommend this series to any SF lover!