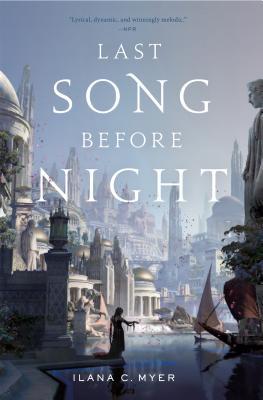 Her name was Kimbralin Amaristoth: sister to a cruel brother, daughter of a hateful family. But that name she has forsworn, and now she is simply Lin, a musician and lyricist of uncommon ability in a land where women are forbidden to answer such callings-a fugitive who must conceal her identity or risk imprisonment and even death.

On the eve of a great festival, Lin learns that an ancient scourge has returned to the land of Eivar, a pandemic both deadly and unnatural. Its resurgence brings with it the memory of an apocalypse that transformed half a continent. Long ago, magic was everywhere, rising from artistic expression-from song, from verse, from stories. But in Eivar, where poets once wove enchantments from their words and harps, the power was lost. Forbidden experiments in blood divination unleashed the plague that is remembered as the Red Death, killing thousands before it was stopped, and Eivar’s connection to the Otherworld from which all enchantment flowed, broken.

The Red Death’s return can mean only one thing: someone is spilling innocent blood in order to master dark magic. Now poets who thought only to gain fame for their songs face a challenge much greater: galvanized by Valanir Ocune, greatest Seer of the age, Lin and several others set out to reclaim their legacy and reopen the way to the Otherworld-a quest that will test their deepest desires, imperil their lives, and decide the future.

Following a young female musician in a world where music and poetry is reserved to men, The Last Song Before Night transports us in a world where, centuries ago, music used to be a dangerously powerful magic. In order to protect the world from evil musicians, music was stripped down of its power and it is now strictly regulated by the Court Poet. The only way to free magic is to find the Path which might be the only way to put an end to the blood plague that has returned to Eivar.

For its lenght and considering that it is a standalone story, this book has a big cast of characters. Kimbralin Asamaroth, who is now calling herself Lin after running away from her mad brother to make a name for herself as a musician is for me the main charactrer of this story and I liked her parts the most. We follow other characters including Darien and Marlen, two Academy students who wants to enter a contest that might allow them to win what they have wanted for so long, for Darien, the hand of the woman he loves, and for Marlen, the pretigious title of Court Poet. Darien’s lover Rianna, the daughter of the most powerful merchant in the realm is also a recurring characters but eventhough all the characters had pretty much the same amount of “page time”, Lin felt the most developped.

I wished I wasn’t so disappointed by this book especially because it started out pretty great. Myer’s prose felt lush and beautiful until it didn’t. Don’t get me wrong, this book wasn’t awful, however, it came so close to be a great book that the fact that it wasn’t just made it worse. It had all the elements to be excellent, a magic system based on music, Seers, an epic quest and it was extremely readable, even if I didn’t end up liking it a lot, I wans’t bored at all while reading. The descriptions at the beginning of the book managed to create a unique atmosphere and well drawns setting and I loved the book up until the middle part where I realized it had several flaws that I really dislike when I see them in books.

Moreover, Myer has a tendency to over explained things a lot. All the things that could have been subtle were repeated over and over again to the point it made some dialogues extremely awkward because it felt like the characters were just repeating things over during two pages. I really dislike it when an author thinks I am to dumb to understand what they are trying to do. Repeating things isn’t helping, it’s just lazy writing.

Also, this felt very tropey, what could have been a very original tale was just a very standart quest story where you could basically find every standart characters, the hero, the mentor, the evil guy and his minions, a path to take to save the world and side characters that are only there to help the main character suceed.

Finally, the pacing was off, the ending was completely rushed and predictable and, the more we read, the less we actually read about music, all the charcatres kept mentionning how much they loved music and poetry but we never really saw any which was frustrating since it is basically the whole premise of the world…

With more editing and diverse characters, this could have worked for me. It was a fast read and it had good elements but at the end it just fell flat and I can’t really recommend this one to anyone. If the premise sounds good to you, go for it, I just hope that you won’t be as disappointed as I was..

13 thoughts on “Book Review: The Last Song Before Night by Ilana C. Myer”