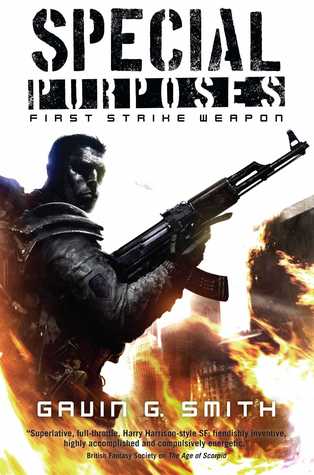 At the height of the Cold War, a Russian special forces team target New York with a horrifying new virus.

Vadim Scorlenski is the sergeant in charge of an elite Spetznaz squad at the height of the Cold War. Sent by the Politburo on a training exercise to the Eastern Seaboard of the United States, Scorlenski and his men discover too late that the practice ‘weapon’ they’re carrying – an exotic chemical agent – is all too real. Betrayed by their allies and cut down by the American police, they go to their deaths…

…and awaken to a scene of turmoil. New York City has been overwhelmed by a horde of the walking dead, a plague that even now is spreading across the globe. Somehow holding onto their identities where all others have become mindless monsters, Scorlenski and his squad set out to return to Russia, to take revenge for what has been done to them.

Since I visibly can’t read blurbs correctly (I really hate spoilers), I didn’t really expect this book to be a zombie book. Let’s just say that I was a bit suprised when, as the first chapter open, Vadim, the quiet yet very bloody Russian Force squad’s leader, wakes up, with blood all over him and meat in his mouth and, it might be worth mentionning, feeling quite dead.

This book was an unexpected surprise, the kind you don’t know you need until you have it on your hands and the only thing you are thinking is “where has this been all my life?”. Reading this after mid-term exams was the perfect time, it was an engrossing read, I read this book in about two sittings and it never felt boring or repetitive.

However, I wouldn’t  recommend Special Purposes just for the blood, I mean, it is entertaining but what really made this book works for me was the characters, the writing and the setting. It wasn’t just action scenes after action scenes, the characters and their internal struggles were my favorite aspect of the book. Smith makes his characters humans in small things. Vadim is a perfect example of that, his constant struggle to remain as human as he can, his regrets for the things he had to for his country, his feelings for his squad reallymanaged to fully flesh him out. For me this book was more than “just another zombie book” because it did have some interesting discussions about things humans could do at their best, or at their worst.

The book has some incoherences that prevented me from rating it more highly but still, I would really recommend this, it’s fun yes, but you are not going to lose brain cells reading it.

I received a copy of this book from the publisher in exchange for an honest review. My thanks to Solaris and Netgalley. All opinions are my own.