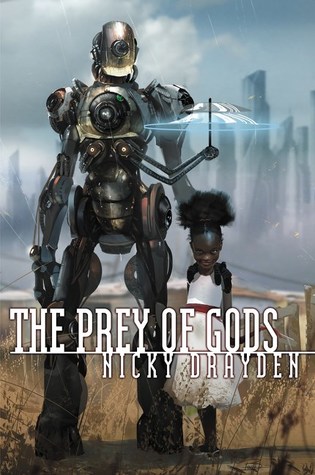 In South Africa, the future looks promising. Personal robots are making life easier for the working class. The government is harnessing renewable energy to provide infrastructure for the poor. And in the bustling coastal town of Port Elizabeth, the economy is booming thanks to the genetic engineering industry which has found a welcome home there. Yes—the days to come are looking very good for South Africans. That is, if they can survive the present challenges:

A new hallucinogenic drug sweeping the country . . .
An emerging AI uprising . . .
And an ancient demigoddess hellbent on regaining her former status by preying on the blood and sweat (but mostly blood) of every human she encounters.

It’s up to a young Zulu girl powerful enough to destroy her entire township, a queer teen plagued with the ability to control minds, a pop diva with serious daddy issues, and a politician with even more serious mommy issues to band together to ensure there’s a future left to worry about.

Set in a futuristic South Africa where everyone has their own personal robot making their life easier, a vengeful godess is slowly preparing the end of humanity as we know itand an AI uprising is upcoming. And all of that because of a new hallucinogenic drug which gives humans superpowers.

The Prey of Gods follows an old goddess, a young girl that has the power to overpower her, a teenage boy, a pop star and a politician who is Stoker during the day and Felicity Stokes at night and who has a lot of mommy issues.

This book is a mess but a very enjoyable one. If you don’t like absurd books, I wouldn’t recommend this one but, I personally really loved it. It was very weird but I was hooked right at the beginning, I could tell I was going to end up liking it a lot after the first chapter. I devoured this book in two sittings and I think it’s a perfect book to read during holidays, it’s fun, fast-paced,hilarious and it really doesn’t take itself too seriously.

If you are not sure it’s something for you, download a sample (from Amazon for example) and read the first chapter, if you like the opening, you will probably like the rest! So yeah, I don’t have much to say except that it is really a fantastic debut, it really managed to blend the elements of SF and fantasy very well and that I will definitely read anything else Drayden puts out in the future!

12 thoughts on “Mini Review: The Prey of Gods by Nicky Drayden”