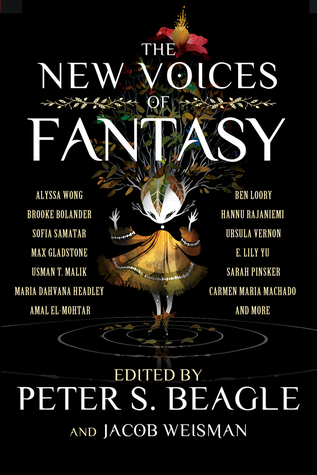 Ready for the next big thing?

The New Voices of Fantasy spotlights nineteen breakout writers who are reinventing fantasy right now. Usman T. Malik, Sofia Samatar, Eugene Fischer, E. Lily Yu, Ben Loory, Maria Dahvana Headley, Ursula Vernon, Max Gladstone, and other emerging talents have been hand-picked by fantasy legend Peter S. Beagle (The Last Unicorn) and genre expert Jacob Weisman (Treasury of the Fantastic). International, crosscultural, and fearless, many of these rising stars have just or are about to publish their first novels and collections. They bring you childhood stories gone wrong, magical creatures in heat, a building that’s alive and full of waiters, love, ducks, and a new take on a bloodsucking fiend.

Tne New Voices of Fantasy is an anthology collecting all sorts of fantastical tales by new(er) fantasy authors: all the stories present in this anthology were previously published in several venues in the last few years  You probably have read or at least heard about some of the authors featured in this anthology such as Max Gladstone, Alyssa Wong, Hannu Rajaniemi, Usman T. Malikin, they are all fairly new authors (even if some have been published a lot of things in the last five years)  and this anthology is great opportunity to discover really interesting works by auhtors new to you!

This anthology is composed of very different types of fantasy and all the authors here have their own style and stories to tell but, even each short was different from one another, I really enjoyed how well The New Voices of Fantasy flowed . I enjoyed most of the stories which is not always an easy feat for me and I discovered or re-discovered amazing stories. If you think fantasy is only about elves, trolls and witches, you will be impressed to see how extraordinary diversed this collection of stories is. If the future of the genre is sampled in this book, we are in for a treat!