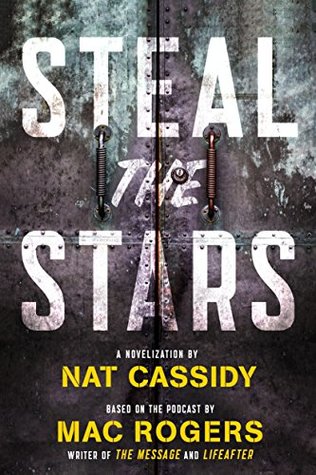 Dakota “Dak” Prentiss guards the biggest secret in the world.

They call it “Moss.” It’s your standard grey alien from innumerable abduction stories. It still sits at the controls of the spaceship it crash-landed eleven years ago. A secret military base was built around the crash site to study both Moss and the dangerous technology it brought to Earth.

It’s love at first sight—which is a problem, since they both signed ironclad contracts vowing not to fraternize with other military personnel. If they run, they’ll be hunted for what they know. Dak and Matt have only way to be together: do the impossible. Steal Moss and sell the secret of its existence.

And they can’t afford a single mistake.

Steal the Stars is the novelization of the podcast produced in 2017 by Tor Labs. You can listen to the podcast for free here. I actually listened to the entire thing before picking up the book but of course, you don’t have to do that to enjoy the novelization by Nat Cassidy.

Steal the Stars follows Chief Dakota Prentiss, also know as Dak, a woman working for Quill Marine, a private research laboratory lead by Sierra Corporation, an organization so big and powerful that it basically rule the Pentagon. Quill Marine isn’t a simple laboratory but an incredibly complex research facility dealing with alien artefacts and Dak has to assure the protection of the site.

Dak isn’t particularly happy with her job but at least, it is so time-consuming that she doesn’t have to think about how shitty her life is. When she has the time, she spent her money on alcohol and tries to forget about her past in the army.

Every day ressemble the others until Matt Salem, a new recruit, joins the team at Quill Marine. He is young, sweet, beautiful and clearly attracted to her. The thing is, if you work at Quill Marine, you can’t “fraternize” with your fellow colleages meaning that their affair is doomed from the start. You can’t just quit working at Quill Marine because of the things you see at the facility and you cannot run away either since Sierra Corp basically rules the US.

So Dak and Matt’s only solution is to buy their freedom stealing a few things at Quill Marine: an alien named Moss and an harp capable of shutting down electric network. Of course, as you can imagine, things don’t go so smoothly for them.

I first experienced Steal the Stars with the podcast. The entire production is really fantastic, it is narrated by a full cast and it has cool special effects. The pacing is also pretty damn perfect and I binge the entire thing in just a few days.  However, I think I prefered the book over the podcast because it allowed me to understand the characters more.

Indeed, in the podcast, I was thrown off by how quickly the relationship between Dak and Matt developped and how intense it seemed. I mean, I don’t like insta-love, I just don’t think things like this happen in real life, of course, attraction can be immediate but love? No. So to see two people barely knowing each other falling head over heels in love after such a short period seemed a bit off to me. However, in the book, I understood a bit more where Dak was coming from, she’s old, depressed about her life and is basically waiting for her miserable life to end so, of course, when a beautiful knight in shining armour arrives, you cannot be indifferent to that. Also she is so desperate that it is easy for her to mistake a simple need for companionship for love.

Their relationship isn’t healthy, it is not something to strive for, they just want to survive and escape their miserable lives. In this book, this desesperation is much more explicit than in the podcast and this explains a lot of what happens toward the end. (The ending is amazing by the way, I totatlly did not see it coming!).

I have to say though that Steal the Stars is much more a character study of Dak than a thriller. The first half is slow-paced and I read a couple of reviews mentionning it as a problem. I didn’t mind it since I listened to the podcast first and I already knew what was going to happen and it allowed me to understand the characters more but I can see why it would bother a few readers. If you are interested by Steal the Stars but you don’t know which format you might prefer, give the podcast a go. It is free and it will give you a sample of the style and the pace.

All in all, I would recommend Steal the Stars, it is a bit different to what I am accustomed  to reading (or listening!) but it kept me on the tip of my toes and I really enjoyed it!

I received a copy of this book from Netgalley in exchange for an honest review. My thanks to Tor Books. All opinions are my own.