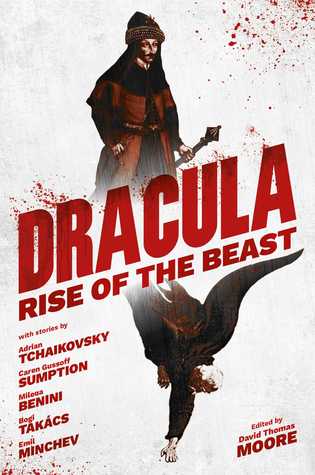 That the cruel, ambitious monster of Bram Stoker’s most famous novel was once Vlad III Dracula, Voivode of Wallachia – the Impaler, to his enemies – is known. A warleader in a warlike time: brilliant, charismatic, pious, ferociously devoted to his country. But what came of him? What drove him to become a creature of darkness – an Un-Dead – and what use did he make of this power, through the centuries before his downfall?

Decades after the monster’s death, Jonathan and Mina Harker’s son Quincey pieces together the story: dusty old manuscripts, court reports from the Holy Roman Empire at its height, oral traditions among the Szgany Roma people who once served the monster.

Dracula: Rise of the Beast is an anthology of five novellas interconnected by a series email between two protagonists who are studying Dracula. The stories are loosely connected and present the many facets of Vlad Dracula: from the Ottoman Wars to the modern days. As usual with anthologies, a few stories didn’t work for me but for the most part, I found this collection very interesting and quite refreshing. You could ask yourself what’s new about Dracula but I assure you that those stories will change your mind about that!

A Jewish rabbi and his nephew spy on Vlad Dracula in a series of letters. I have to say that this story was the one that impressed me the least and since it’s the first story of the anthology, it didn’t leave me with a great first impression. It took me days to read because I had trouble getting into the story. It is extremely slow-paced and I felt like we didn’t learn a lot about Dracula in this one.

I always look forward reading any of Tchaikovsky’s stories, his name was one of the reason I was interested by this particular anthology.

This story follows Erzsebeth Báthory, an Hungarian countess famous for her murders (I had to Google that because while reading I felt like I was missing something and she existed! you can read more about it here). She was rumoured to bathe in the blood of the innocents she murdered in order to remain young, always. Because of that, she gained the surname of Lady Dracula and it is Tchaikovsky’s takes on this urban legend.

This story was quite horrifying as we read diaries entries written by Báthory as she slowly experiment with her victims in order to win her battle against Dracula. Her character is brutal and unforgiving and it was fascinating to see how sure she was of the right of her actions.

A tragic story of two brothers that can’t live together. What surprized me the most about this story was how much Dracula’s character felt relatable to me. In most stories, he’s the bad guy yet in this one story, he felt almost human. I cannot say he was likeable but as far as a vampire goes, he was quite nice! I wish Vlad and Radu’s history could have been more detailed, the ending felt a bit rushed and  and the story too surface-level for my liking. I wish we had had a bit more knowledge about their relationship and their inner conflict. I still enjoyed this story but I wanted more.

Children of the Night by Emil Minchev ★★★★★

Children of the Night is definitely my favorite story of the anthology. It is one long letter written by Dracula to one of his vampire friends where he counts his love affair with a monster. It was extremely gruesome and horrifying yet strangely fascinating to read about. We learn how his children came to be and how Dracula was seduced by the strange creature. It sure is an odd story but I was hooked from the start!

This novella counts three different stories focused on Romanian women connected through the ages. It is told thanks to a mix of documents such as diaries entries, blog posts and letters and we slowly learn how the women are connected. It was another great story centered around family and Romanian culture. I don’t want to say much more than that because the beauty is discover bit by bit how the storylines intertwine with each other!

As usual with anthologies, all the stories didn’t all work for me but for the most part, I found them good and they push me to make some research of my own. I’m also happy to have discovered some new-to-me authors since the only author I heard about previously was Adrian Tchaikovsky. I definitely want to read some more stories by Caren Gussof Sumption and Emil Minchev!

Required reading to any Dracula fan and highly recommended to horror and dark fantasy lovers!

I received a copy of this book through Netgalley. My thanks to Rebellion Publishing, all opinions are my own.