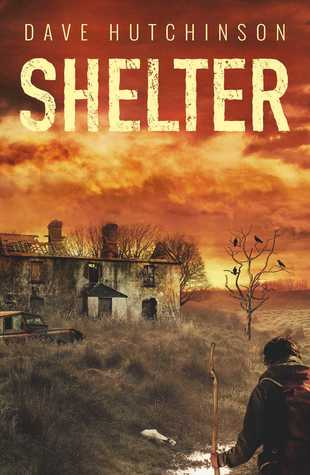 The Long Autumn is coming to an end. For almost a century after the coming of The Sisters, the surviving peoples of rainswept England have huddled in small communities and on isolated farms, scavenging the remains of the old society. But now society, of a kind, is starting to rebuild itself. In Kent, a brutal tyranny is starting to look West. In the Cotswolds, something terrible and only vaguely-glimpsed is happening. And in a little corner of Berkshire two families are at war with each other. After decades of simply trying to survive, the battle to inherit this brutal new world is beginning.

Shelter is the first book in the Tales of the Aftermath, a series part of the Solaris Worlds project where each series are written by several authors. In the case of the Tales of the Aftermath, the first book is written by Dave Hutchinson but the sequel, Haven will be written by Adam Roberts. Since I admire both of those authors, I was definitely intrigued by this series from the start and I very much like the concept of this project.

Set in a post-apocalyptic England devasted by the fall of two asteroids called the Sisters, we follow several people trying to rebuild civilizations: a spy investigating a village ruled by a dangerous individual, two families fighting each other because of a misunderstanding and a couple trying to survive in a remote farm. The book is set about a hundred years after the Sisters and humanity as we know it was destroyed. Families who were just trying to survive on their own are now trying to build cities again. However, a lot of knowledge was lost, most of the world population is dead and the majority of the survivors were to busy not dying that they lost a lot of basic things such as reading and writing which makes the whole rebuilding aspect even more complicated because only a few people can read the remaining books that could help them.

Shelter is very bleak book, a lot of characters are very unlikeable if not completely mad and a lot of conflicts happening in the book feel a pointlessy violent. It’s especially the case of the war happening between the two families: a lot of innocent end up loosing their life over this conflict and, even if they all know the war started because of a misundersatnding, people can’t seem to stop it from escalating. Because of how bloody and bleak Shelter is, I can’t really say I enjoyed it however I still found parts of it fascinating. It doesn’t feel like your typical post-apo book and I thought it discussed very interesting “what ifs” especially in terms of human behaviors if such a situation were to happen. My favorite part was definitely the whole investigation which is not surprising since I think Hutchinson masters the art of spy novels in a speculative setting, his Europe Fractured Sequence novels being a perfect example of that and one of my favorite series of all time.

Shelter isn’t my favorite work by him but it’s only the first book in what I think is going to be a quartet and I am definitely intrigued enough to continue. I think this series has a lot of potential and I already pre-ordered Haven, the sequel, which is coming out early next-month.

9 thoughts on “Book Review: Shelter by Dave Hutchinson (Tales of the Aftermath #1)”