Well I haven’t done this kind of post in a long time! As you may have noticed by my irregular schedule, 2018 wasn’t really the year of blogging. It’s mostly due to college and not having the time to read at all. In September I read the astounding number of zero books so that explains a bit why I’ve been so absent.

However, October was a much better month because I managed to go back to my usual routine after a couple of weeks where I was trying to get used to my new semester. I managed to finish a couple of books and write a couple of reviews and, even if it’s not as much as I wanted, it’s still better than nothing!

November is mid-term exams month so I won’t be too active but I’ll try my best to still post because it’s Sci-Fi Month and I love this event.

If you’re new to Sci-Fi month, it’s an annual event hosted by Imryil and Lisa where a lot of wonderful bloggers celebrate science fiction by reading of bunch of SF books, reviewing sci-fi movies, games, shows and all of that good stuff! It’s a lot of fun and if you want to follow updates and Sci-Fi Month posts, I highly recommend following  both @SciFiMonth and #RRSciFiMonth on Twitter! 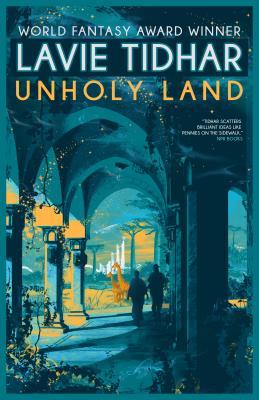 First of all, let’s appreciate the beauty of this cover: it’s absolutely gorgeous!

Unholy Land is by far my favorite book of the month and one of the strongest contender for the best book I read this year. It’s beautifully written, extremely clever and the story is fascinating and weird. My review will go up before the end of the week but I already raved about this book quite a bit on Twitter (Shameless plug: you can follow me @thesffreader).

I usually have a giant Sci-Fi Month TBR and then completely fail at reading anything on it because I’m too overwhelmed. This time I tried to be very raisonable and only put books that, really, I should have read eons ago. So here are the things I want to read:

And yeah, I’ve put Ancillary Justice in a million TBRs before and I never read it but this time, I’ll do it. I don’t know what my problem is with this book, it sounds fascinating but I always forget about it.

Are you participating in Sci-Fi Month? If so, what do you plan on reading/watching during November?

Have a great month! If you are particiating in NaNoWriMo, good luck to you!