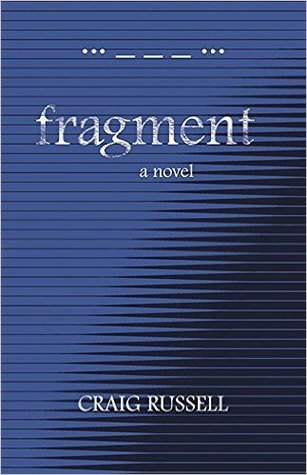 When avalanching glaciers thrust a massive Antarctic ice sheet into the open ocean, the captain of an atomic submarine must risk his vessel to rescue the survivors of a smashed polar research station; in Washington the President’s top advisor scrambles to spin the disaster to suit his master’s political aims; and meanwhile two intrepid newsmen sail south into the storm-lashed Drake Passage to discover the truth.

Onboard the submarine, as the colossal ice sheet begins its drift toward South America and the world begins to take notice, scientists uncover a secret that will threaten the future of America’s military power and change the fate of humanity.

And beneath the human chaos one brave Blue Whale fights for the survival of his species.

Fragment is a science fiction eco-thriller book set in a future where the world is even more oblivious to the consequences of climate change. It opens up when a huge iceberg, the Fragment, detaches itself from the Antartic ice sheet and starts drifting toward South America.

The book follows how this event impacts the life of several characters including a trio of scientists who were working on scientific base located on the Fragment, a journalist who desperately wants to figure out what the hell is happening, soldiers, the captain of a ship and, most importantly: Ring, a blue whale.

The cast of characters is pretty big considering the length of the book (about 200 pages) which was both a quality and a weakness.  I really liked how it allowed me to see how this event could impact people on several levels and how they reacted to it. Indeed, for the scientists who spent years of their lives trying to prevent such an event, the fall of this iceberg is a disaster. They know it’s going to cause the death of thousands of people if the world doesn’t react to it. However, we also follow people who couldn’t care less about it as long as it doesn’t affect their country or their life directly. For example, we got several scenes featuring the President of the United States and we can see how he wants to use this to advantage to be reelected and that he doesn’t really care about anything else.

Even if I enjoyed all the POVs (my favorite was without a doubt Ring, the blue whale), sometimes the jumping around was a bit too much. Each scene tend to be quite short and, by the end of the book, I didn’t feel like I really knew any of the characters all that well.

However, I still enjoyed the book quite a bit, I tend to really like climate fiction books, it’s always fascinating to see the consequences of climate change. It’s also one of those few books that manages to deal with a lot of ideas in such a short length. The more I read, the more I realized how much I like short books. When I first started reading , I was all about those huge tomes but right now, I tend to appreciate more a concise story (it might be because I read so much short fiction) or because I don’t have a lot time to read theses days).

My favorite thing about this book were the parts involving the whale and how the scientists managed to communicate with him. I never thought reading from the perspective of a whale would be that cool to be honest. I really liked how the scientists were able to convey very human concepts in a way that would be understandable to another specy and how important it was for the story.

I would definitely recommend Fragment if it sounds interesting to you. If you want to get into climate fiction, it would be a great one to start with, it’s not as intimitating as New York 2140 for example. It’s quite fast-paced but it still manages to deal with very important issues.

I received a copy of this book from the author. All opinions are my own.