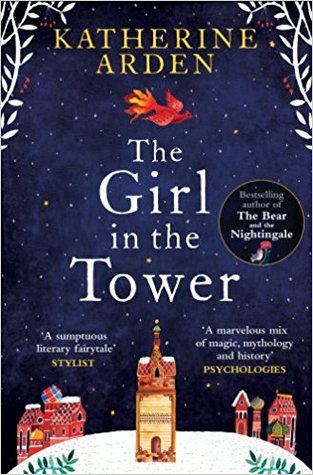 For a young woman in medieval Russia, the choices are stark: marriage or a life in a convent. Vasya will choose a third way: magic…

The court of the Grand Prince of Moscow is plagued by power struggles and rumours of unrest. Meanwhile bandits roam the countryside, burning the villages and kidnapping its daughters. Setting out to defeat the raiders, the Prince and his trusted companion come across a young man riding a magnificent horse.

Only Sasha, a priest with a warrior’s training, recognises this ‘boy’ as his younger sister, thought to be dead or a witch by her village. But when Vasya proves herself in battle, riding with remarkable skill and inexplicable power, Sasha realises he must keep her secret as she may be the only way to save the city from threats both human and fantastical…

Remember last year when I just finished The Bear in the Nightingale and I was like “This book is so good, I’m definitely going to read the sequel as soon as I can!”, well, here we are a year later… 😀

To my defense, the end of The Bear in The Nigtingale was very satisfying, it can be read as standalone story. I really  appreciate authors who don’t fall in the easy cliffhanger ending. However, because of that, I didn’t felt like I had to pick up the sequel right away.

The Girl in the Tower opens up exactly where the first book ended. I will try to be as vague as possible to avoid any major spoilers but if you don’t want to know anything about this book, I suggest that you stop reading now.

Vasya is fleeing Lesnaya Zemlya after the events of the first book, she knows she can never become the woman the society is expecting her to become.  She’s way too indepedent to be married off to some lords or, even worse, to be sent to a convent. She wants to travel, to feel the wind in her hair while she’s discovering the world on the back of Solovey, her magic stallion, and she knows she will never be able to do that in Lesnaya Zemlya.

During her travel, Vasya realizes that she doesn’t really know where she wants to go or what she wants to do with her new-found freedom. She knows nothing about the world and how hard it is to travel on her own in medieval Russia, especially during winter.  One day, she stumbles upon a burning village where she learns that some girls were kidnapped by bandits. She manages to save them with the aid of Solovey and in her rescue, she encounters the Grand Prince of Moscow accompagnied by her brother Alexsandr that she hasn’t seen in years.

Since she’s disguised as a boy, it would be a great dishonor for her family to show that she’s a girl so, with the aid of her brother, she introduces herself as Vasili, the younger brother of Alexsandr. The Grand Prince takes an immediate liking to her and decides to bring her back to Moscow.

In the city, Vasya realizes that maintaining her disguise will be way more complicated that she ever thought it would. If she’s discovered, it would endanger her family but also herself. It doesn’t help that, even if she wasn’t intending to do so, she’s now involved in the politics of the nation. Indeed, in Moscow, Vasya realizes that the various kidnapping might be linked with an incoming conflict and she’ll do everything in her power to prevent that.

I liked The Girl in the Tower quite a bit, it was a change of pace from the first book and it introduced even more characters and raised the stakes even higher.

The writing remains as intricate and gorgeous and it was a pleasure to read about the beauties of Moscow under the snow. However, I think I preferred the first book. The world lost a bit of its magic in the sequel for me. It’s probably because the setting of the first book was more propice to the fairytale-like quality of the writing. The Girl in the Tower was much more focused on politics and the life in a big city at the time. I usually like books centered around political maneuvering but, I didn’t feel like it was very well done in this story. I found a lot of things to be predictable and the “big” reveals were underwhelming.

Another aspect that I wasn’t found of was the romance, as much as I liked how it was hinted at in the first book, I didn’t like how it developped in the sequel. It might be because of the writing, it is beautiful but very detached and because of that, I didn’t feel any type of connection between the two love interests and I just found their interaction weird.

However, I still enjoyed this book, I read it when it was snowing heavily in France and it was the perfect for this time of the year. I still liked the magical elements and Vasya is a great character to follow. She’s headstrong, brave and clever. She also cares for her family and she tries her best to protect them while preserving the life she wants to have. I’m curious to see how the events of this book will shape the conclusion of this trilogy, I will definitely read the sequel but not right now, I will probably wait for the next snow!

9 thoughts on “Book Review: The Girl in the Tower by Katherine Arden (Winternight Trilogy #2)”