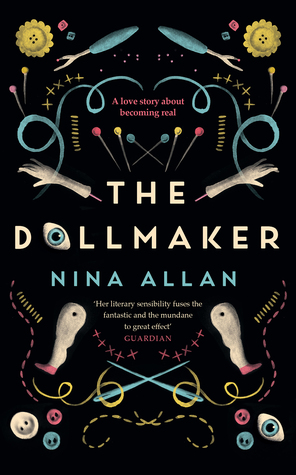 Stitch by perfect stitch, Andrew Garvie makes exquisite dolls in the finest antique style. Like him, they are diminutive but graceful, unique, and with surprising depths. Perhaps that’s why he answers the enigmatic personal ad in his collector’s magazine.

Letter by letter, Bramber Winters reveals more of her strange, sheltered life in an institution on Bodmin Moor, and the terrible events that put her there as a child. Andrew knows what it is to be trapped, and as they knit closer together, he weaves a curious plan to rescue her.

On his journey through the old towns of England, he reads the fairy tales of Ewa Chaplin–potent, eldritch stories which, like her lifelike dolls, pluck at the edges of reality and thread their way into his mind. When Andrew and Bramber meet at last, they will have a choice–to break free and, unlike their dolls, come to life.

A love story of two very real, unusual people, The Dollmaker is also a novel rich with wonders: Andrew’s quest and Bramber’s letters unspool around the dark fables that give our familiar world an uncanny edge. It is this touch of magic that, like the blink of a doll’s eyes, tricks our own.

The Dollmaker is a book composed of many stories. The main narrative follows Andrew, a man fascinated by dolls. His fascination started when he was eight years old and bullied because of his height. Something about their smallness and imperfections allowed him to accept how he was perceived by other people. However, what just started as a hobbie became his life when people started to buy his own creations: his monstrous yet fascinating troll dolls. Composed of parts taken from other broken dolls, they are Andrew’s tiny Frankenstein monsters.

While reading a specialized magazine, he stumbles upon an ad written by Bramber Winters, a woman looking for information on Ewa Chaplin, a famous dollmaker. Andrew doesn’t know a lot about Chaplin but he’s immediately captivated by the ad. They soon start exchanging letters and Andrew quickly realizes than he is in love with Bramber. Once he realizes that, he knows he has to meet her. However, Andrew knows two things  about Bramber: she loves dolls and she has been living in West Edge House, a former mental hospital for twenty years.

The Dollmaker follows Andrew’s journey as he crosses the country to meet the woman he’s obsessed with. During his travel, he decides to give Ewa Chaplin’s collection of short stories a try since they are so important to Bramber.  However, as soon as he starts reading the strange and eerie stories, he realizes the odd similarities between them and his own life.

As I mentioned, this book has a very interesting structure, some sections are narrated by Andrew, other are fragments from Bramber’s letters or stories written by Ewa Chaplin. I loved the short stories which isn’t surprising since I love Nina Allan’s short fiction. Her prose is superb and very atmospheric. The Chaplin stories all had the same eerie quality, beautiful writing and fascinating themes. Dwarves, dolls and monsters are at the center of those five stories and they were without a doubt what I loved the most in The Dollmaker.

I was also fascinated by Bramber’s letters, I loved learning about her and slowly discovering why she wanted to stay at West Edge House. Her story is very interesting  and her letters were written in a sort of stream of consciousness style that allowed me to really understand her. I wish Allan’s had included some of Andrew’s letters. It would have been a great way to see how he portrayed himself to Bramber. Since we only get Bramber’s perspective, I could only guess from her answers.

The rest of the book was narrated from Andrew’s perspective, he’s not a particularly nice but the world never gave him any reason to be. His unhealthy fascination for broken dolls and for Bramber was pretty creepy but, in a bizarre way, I could understand why he acted the way he did.

Bramber and Andrew are both very odd characters, they seem to be living outside of time. Except for a few mentions of technology, this story could be set decades ago: both characters use letters to communicate and Andrew’s journey to Bramber takes days because he stops in several cities.

It’s an emotional and delicate story written in an unconventional way. It is an immersive experience for sure but it is very slow-paced. It’s a quiet character-driven story about two people trying to forget parts of their childhood. Some parts are fantastical and the stories lean on the horror side however, I wouldn’t call this book fantasy or horror. If I had to categorize it, I’d say it’s a literary fiction book with magical realism elements. If you like your books action-packed with a lot of speculative elements, The Dollmaker isn’t the book you’re looking for. However, if you want to read a slow and quiet story about two complex characters, I would highly recommend!

I received a free copy of this book in exchange for an honest review. My thanks to Netgalley and riverrun. All opinions are my own.

6 thoughts on “Book Review: The Dollmaker by Nina Allan”