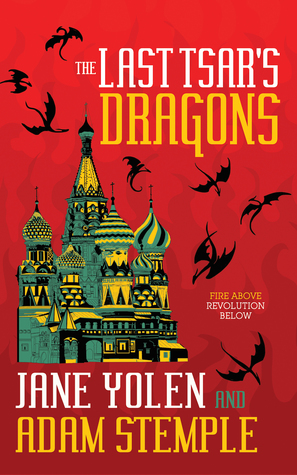 It is the waning days of the Russian monarchy. A reckless man rules the land and his dragons rule the sky. Though the Tsar aims his dragons at his enemies—Jews and Bolsheviks—his entire country is catching fire. Conspiracies suffuse the royal court: bureaucrats jostle one another for power, the mad monk Rasputin schemes for the Tsar’s ear, and the desperate queen takes drastic measures to protect her family.

Revolution is in the air—and the Red Army is hatching its own weapons.

Discover Russia’s October Revolution reimagined in flight, brought to life by the acclaimed mother-and-son writing team of the Locus Award-winning novel, Pay the Piper, and the Seelie Wars series.

The premise of The Last Tsar’s Dragons is pretty self-explanatory, it’s a retelling of the beginning of the Russian Revolution… with dragons. At first, only the Tsar has dragons that he mainly uses to chase Jews but, inevitably, the Bolsheviks manage to steal a couple of eggs and raise their own dragons, which are – obviously – red (and not black like the Tsar’s).

At first, I was intrigued by this book because of two reasons: the dragons and the gorgeous cover. Like pretty much everyone, I absolutely love dragons. Eragon is the book that made me fall in love with fantasy and, Goblet of Fire is one of my favorite Harry Potter books just because of the dragons (I still want a Hungarian Horntail to this day).

Having said that, while the dragons and the gorgeous cover made me look at the book twice, I was also intrigued by the concept of the story. The Russian Revolution is a fascinating period of history, so, of course, I thought that it would be even more interesting with the added of bonus of having dragons. Because dragons are awesome and everything is more interesting with them, right?

Well, no. At least, not in this book.

I must admit that this was a pretty disappointing read for me. While the concept was great, I found the execution lacking in many ways. First of all, the dragons are basically useless in the story, they’re just used as weapons but you could easily take them out and it wouldn’t change a thing in the book.

I enjoy historical fiction so, when I realized how little the dragons mattered, I thought I could still enjoy this novella as a historical fiction story. However, even that way, it wasn’t that interesting either. The story is told from several perspectives: Lev Bronstein (Trotsky), Rasputin and an unnamed bureaucrat. Out of the three, the bureaucrat is the one we follow the most and I found his parts tedious to get through. He’s extremely unlikeable and, while I don’t mind reading from the perspectives of douchey characters, they have to be remotely interesting. However, I can’t say that his character arc or his personality were particularly intriguing… I only kept reading for the occasional Trotsky scene because they were a bit more engaging but it wasn’t enough to redeem this book in my eyes.

So, in the end, I was a let down by The Last Tsar’s Dragons. It’s less than 200 pages yet, it took me ages to read. The characters were, for the most part, boring and unlikeable and, the dragons were underused. I don’t think the novella format suited the story. It’s pretty difficult to write a really good novella, sometimes they can feel like drawn-out short stories or condensed novel. I think this book fell into the former category: it would have been a lot stronger as short story only focusing on Trotsky and his dragons.

I received a copy of this book from Netgalley in exchange for an honest review. My thanks to Tachyon Publications. All opinions are my own.