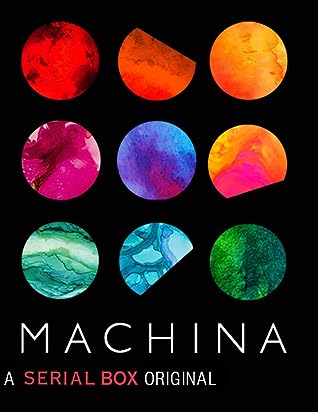 With Earth becoming increasingly uninhabitable, some look to space for humanity’s salvation. In the arid California desert, two companies face off for the opportunity to develop the autonomous robots that will precede settlers to Mars. Scientists and staff alike mingle at Moonshot Bar, and they all begin to realize that there’s more than scientific discovery at stake.

After a series of climate catastrophes, Earth is falling apart and Mars is the only hope for humanity. Four computer-science students: Trey, Stephanie, Smits and Lakshmi dream of working together to create an AI that will help them terraforming the red planet.

Several years and arguments later, what started as one company has now become two. Trey is the head of Devlok, Stephanie and Lakshmi are the heads of Watchover and Smits is now a bartender with a robot dog.

A competition is organized to select the company that will send their AI on Mars to establish the first camp. Of course, Devlok and Watchover are the two runners-up and there can be only one winner. Trey is certain that Watchover stole code from Devlok and, Stephanie and Lakshmi want to prove that Watchover is completely different and better than their former company.

Machina is told from the point of view of Trey, Stephanie, Lakshmi, Smits but also several employees of both companies like Watchover’s genius programmer Cameron, Devlok’s sociologist Noor and a reporter who always manages to be at the center of the action.

This book was so much fun! It was my first time reading an episodic novel: it is written by four authors and they all worked on a couple of episodes (or chapters) each. I was worried that it might disrupt the flow of the story but actually all the authors’ voices worked well with each other and it wasn’t jarring at all. The first episode was so intriguing that I had to read the following episodes immediately.

I am a sucker for competition in books, I had so much fun discovering the different challenges and how companies had to deal with the various issues with their AIs (and  employees!).

Out of all the point of views, my favorites were Stephanie’s and Noor’s since they were the characters that intrigued me the most. I really liked the fact that we followed people from both companies, indeed, at first, Watchover sounds like the best place on Earth while Devlok looks like the worst company ever. However, the more the story goes on, the more we understand that it’s not as simple as that and that each company and employees are morally grey.

I really enjoyed how fast-paced and fun the story was. The only complaint I have is that some characters were kind of flat. For example, Cameron is a non-binary super smart programmer and while their perspective was interesting, they weren’t fleshed out that well. A lot of times, I didn’t understand why they reacted the way they did to certain situations. The same goes for Trey, he’s kind of the bad guy of the story: he’s self-centered and obsessed with winning but in my mind, it’s not enough to make a character. However, even if the characters weren’t the most complex, I had so much fun while reading and I was so immersed in the story that it didn’t bother me that much.

If Machina sounds interesting to you, I would definitely recommend it. I couldn’t put it down: each time I finished an episode, I wanted to read the next one immediately. I mean, it has all the elements to make a great story: AIs, robots, challenges and nerdy programmers who want to go on Mars. What’s not to love?

I received a copy of this book from Serial Box in exchange for an honest review. All opinions are my own.