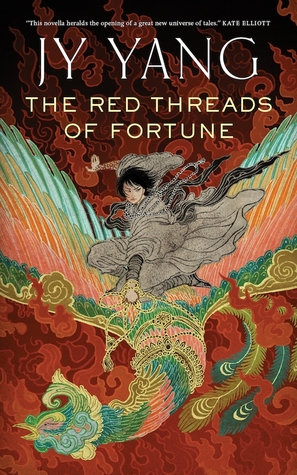 Fallen prophet, master of the elements, and daughter of the supreme Protector, Sanao Mokoya has abandoned the life that once bound her. Once her visions shaped the lives of citizens across the land, but no matter what tragedy Mokoya foresaw, she could never reshape the future. Broken by the loss of her young daughter, she now hunts deadly, sky-obscuring naga in the harsh outer reaches of the kingdom with packs of dinosaurs at her side, far from everything she used to love.

On the trail of a massive naga that threatens the rebellious mining city of Bataanar, Mokoya meets the mysterious and alluring Rider. But all is not as it seems: the beast they both hunt harbors a secret that could ignite war throughout the Protectorate. As she is drawn into a conspiracy of magic and betrayal, Mokoya must come to terms with her extraordinary and dangerous gifts, or risk losing the little she has left to hold dear.

The Red Threads of Fortune follows Mokoya, Akeha’s twin sister, as she is chasing a rogue naga, a dragon-like creature that is threatening the city of Bataanar. This task is very dangerous as nagas are ferocious creatures and hunting it alone is seen as madness. But Moko doesn’t care, she wants to find the naga and destroy by any means possible. During her quest, she meets Rider, a strange naga rider that seems to know a lot about her… and about the danger that is threatening Bataanar and the Machinists.

While the first two novellas of the Tensorate series are marketed as twin novellas that can be read in any order, I strongly advise you to read this novella after The Black Tides of Heaven as it makes a lot more sense chronologically and The Red Threads heavily deals with the consequences of the event that happens at the end of the first novella.

The Black Tides has a strong focus on the childhood on the twins, in the first novella Moko is shown as a bright powerful child who had a lot of assurance and trust in herself. The Red Threads of Fortune showcases a very different character: she has now become a grieving mother and a woman suffering from PTSD. She is angry at herself, at the world and she’s trying to forget painful memories by fleeing her past.

This novella has a very different structure from the first novella which spans several decades. This story is much more contained and it has a very classic quest structure. However, I liked how the Yang juxtaposed this classic quest journey with the internal emotional journey Moko is going through.

Another strong point of The Red Threads was the relationships between the different characters. I don’t think romance is JY Yang forte, the romantic relationships are all very insta-lovey but, I think they shine at portraying friendships and fraternal bonds. I love seeing the twins interact with each other. I also think the complicated dynamic between Moko and her husband was really believable. Because of how hurt she is by what happened in the first book, Moko cannot see her husband without remembering what happened to her family. She prefers to hide instead of confronting her issues. While it can be frustrating to read about, I think it’s a very human reaction. I can see myself reacting the exact same way as the main character if I were in a similar situation. I found her struggle depicted in a very believable way. Finally, even if the romance between Rider and Moko was very quick, I really enjoyed the discussions they had together and how comfortable they felt around each other.

While I personally enjoyed the first novella more, The Red Threads of Fortune is a fascinating story about motherhood, overcoming grief and relationships. It manages to expand the scope of the world, to introduce new fascinating characters while discussing important themes. I really love this series; I cannot wait to read The Descend of Monsters.