You may or may not know it but Uncanny won a Hugo Award last year in the category Best Semiprozine. Uncanny is a very young short fiction magazine (it has less than three years) but they publish good short fiction from very famous speculative fiction author. If you want to dip your toes in short fiction, I would highly recommend this magazine because it is one of the most accessible magazine in my opinion.

I have only read a couple of issues so far and I liked them all so I would like to read this magazine more regularly this year! 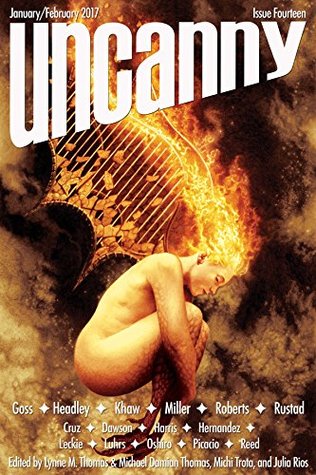 As one of Sam J. Miller biggest fangirl, I was very pleased to see that he had a story in this issue. I mean this man can write. As usual with Miller, this story is about love, loss and friendship and it features queer main characters. Bodies Stacked Like Firewood follows two characters dealing with the suicide of their mutual friend, Cyd. Those two characters don’t know each other before Cyd’s death and it was fascinating to see how this death affected their behavior and how they could relate to each other.

This has few speculative fiction elements, just a bit of magical realism at the end and even though it is not Miller’s strongest work, it’s still very good (and depressing).

Following two monster sisters who both deals very differently with their monstrous abilities, this relevant story has a lot to teach to girls who aren’t confident in their bodies. It’s a very hard story and there are descriptions of sexual assaults but I found it very important. It is quite short but I found it extremely thought-provocking and fascinating.

I tend to dislike most of Khaw’s stories so when I saw this story, I was tempted to not read it at all. However, I’m glad I read it because it is definitely a good story, it is very weird and I’m not exactly sure I really understood what it was talking about but, I think it is about a woman trying to prove she was abused to a jury of gods. This woman wants to punish her agressor but no one want to listen to what she has to say. The gods just want her to be quiet in exchange for a compensation. As with the previous story, it’s a very relevant story indeed.

This one is very different form the other stories, it is very light-hearted and cheesy since it follows a speed dating session involving a woman and Cupid. I don’t have much else to say except that it was very fun and I wished it had been longer!

I thought I was going to love this story but it was the story I liked the least of all which was very disappointing. It follows a god who tries to get his lover back after abandonning her to a malediction for years. I was pretty boring and I just couldn’t really care about the characters at all. I don’t even remember if I finished it or not. Definitely not memorable at all.

This very well-written piece is a ghost story heavily insprired by Edgar Allan Poe, I can’t say much more about it because I haven’t read much Poe so I think most of this story went over my head, but it was still cool, I just wished I had understood it better!

To Budapest, With Love – Theodora Goss

Another very strange one, I think it is more of a love letter to Budapest than an actual story but it was still extremely interesting. It follows a protagonist at different stages of her life and how her opinions of the city of her birth, Budapest, change with time. It’s a story about immigration, accepting who you are and your culture. Very well written but odd.

Issue 14 wasn’t my favorite Uncanny Issue but it still had interesting stories and except for the Ann Leckie one that I just didn’t like at all, it had some really unique stories! 🙂