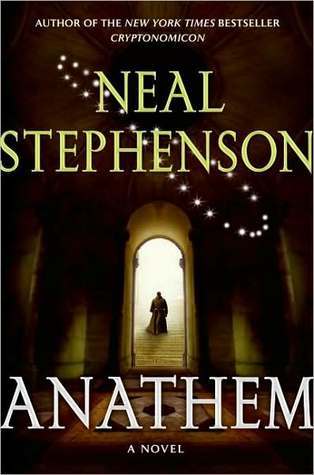 Publisher’s description (very much so full of spoilers, read at your own risk..)

Fraa Erasmas is a young avout living in the Concent of Saunt Edhar, a sanctuary for mathematicians, scientists, and philosophers, protected from the corrupting influences of the outside “saecular” world by ancient stone, honored traditions, and complex rituals. Over the centuries, cities and governments have risen and fallen beyond the concent’s walls. Three times during history’s darkest epochs violence born of superstition and ignorance has invaded and devastated the cloistered mathic community. Yet the avout have always managed to adapt in the wake of catastrophe, becoming out of necessity even more austere and less dependent on technology and material things. And Erasmas has no fear of the outside—the Extramuros—for the last of the terrible times was long, long ago.

Now, in celebration of the week-long, once-in-a-decade rite of Apert, the fraas and suurs prepare to venture beyond the concent’s gates—at the same time opening them wide to welcome the curious “extras” in. During his first Apert as a fraa, Erasmas eagerly anticipates reconnecting with the landmarks and family he hasn’t seen since he was “collected.” But before the week is out, both the existence he abandoned and the one he embraced will stand poised on the brink of cataclysmic change.

Powerful unforeseen forces jeopardize the peaceful stability of mathic life and the established ennui of the Extramuros—a threat that only an unsteady alliance of saecular and avout can oppose—as, one by one, Erasmas and his colleagues, teachers, and friends are summoned forth from the safety of the concent in hopes of warding off global disaster. Suddenly burdened with a staggering responsibility, Erasmas finds himself a major player in a drama that will determine the future of his world—as he sets out on an extraordinary odyssey that will carry him to the most dangerous, inhospitable corners of the planet . . . and beyond.

I read this wonderful book last month but I wanted to save the review for Sci-Fi Month so here it is !

Anathem is a hard science fiction that takes place in an alternate universe but has strange similarities with our own. The structure of this world’s society is peculiar, indeed, all the intellectuals are secluded in Concents (which are basically monasteries) and they have almost no contact with the people living on the outside of the wall fo their concent which is why, the people living outside are called extramuros.

Inside each concent, the avouts, are divided in different math, which representent the different sections of the Concent. Depending on your math, you’re allowed to allowed to go outside the concent every year, decades, centuries or millenium. Otherwise, contacts with other people than the avout in your math are forbidden. Moreover, the avouts don’t have any access to technologies wich means that the only way they can study is through observation and pure theorics.

Our main character, Fraa Erasmas, a young avout of the Concent of Saunt Edhar, is a Tenner (a member of a math which opens its doors every decade) happily studying and learning theorics with his friends. At the beginning of the novel, we learn that Apert, the name of the event where the doors of Concent opens to the extramuros, is going to happen. Of course, it’s one of the biggest event for the avout because, it means that, for a week, they can see their family and see how the world around them has changed. However, toward the end of Apert, for unknown reasons, the Saecular power, the leaders of the extramuros, decides to close a particular part of the Concent, the observatory. Of course, since the avout don’t have access to any information, questions are asked. Why their only mean of astrological information is stopped ? What does the Saecular don’t want them to see ? How could it impact their lives ?

Well you have 900+ pages to learn. And believe me when I say that it is freakin’ epic.

Anathem is a book that must have been very long to write, every bit of history, of science and politics felt real and developped. Stephenson literally invented millenias of history and, believe it or not, they actually were incredibly important to the story.

At first this book is overwhelming, Stephenson wants you to know everything about the world he created, about the architecture, the reflexion and the science behind everything. You know about the plants, the food, the buildings, the differents types of people and all of that, pretty early on. I think that’s why at first this book was such a challenge for me. I tried to read it twice before and I had to give up because I couldn’t immerse myself into the world. However, I knew it was the perfect time to give this book another chance when I found myself in the mood for a very dense brick with a lot of scientific facts because well, that represents most of Stephenson’s works.

If you’re not just a tiny bit geeky or eager to read about science and philosophy, I won’t recommend this book. It’s dense and it’s full of very long dialogues where people are discussing scientifical and philosophical theories. Those were my favorite parts in the book but it’s definitely not for everyone.

As I said, I really loved all the scientifical and philosophical parts and I really liked how, in this world, science and religion are basically the same. The point is made very early on since the avout basically live secluded like monks in monasteries-like buildings and i found this aspect particularly fascinating.

Even though I rated this book five stars, it has some flaws. As I mentionned, it is quite dense and hard to get into, some dialogues are very long and evn if they were interesting, I strongly believe that some of them could have been cut in half because sometimes, I just wished that Stephenson could make his point a little faster. I didn’t bother me too much but still, I think it’s worth mentionning.

Oh yes and the ending isn’t good, Stephenson just isn’t good at them. Either that or he just doesn’t care at all about them, I don’t know. Seveneves was a little better than Anathem in this aspect but it just seems that, he doesn’t know how to end his book so basically, he doesn’t. The ending didn’t affect the overall story so, it didn’t ruin anything, but, it’s just not good. I mean, if you read the book, I’m pretty sure you think teh same thing. When I read the last sentence, I thought that my book was missing pages and well I realized it didn’t, I ran to my father (who has read the book) screaming « What the fuck is this random ending ??  Really ? That’s how he finished this ? ». It did made him laugh at least.

Anyway. I’m still frustated about it.

Since I can’t seem to write a coherent review, let’s just say that : try Anathem. Yes it’s dense but the story, the characters, the world and the science behind it are amazing. This book is going to suprise the hell out of you. It goes in direction you will never expect and who doesn’t want to read a book like that ?