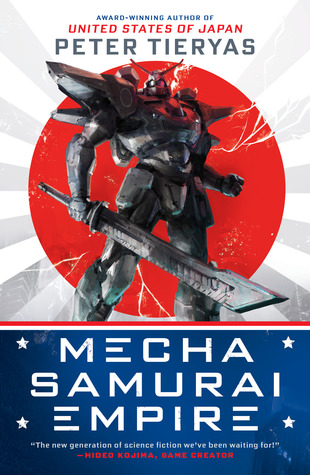 A standalone book set in the USJ universe, Mecha Samurai Empire focuses on a group of aspiring mecha cadets preparing to fight the Nazis.

Foremost among them, Makoto Fujimoto grew up in California, but with a difference–his California is part of the United States of Japan. After Germany and Japan won WWII, the United States fell under their control. Growing up in this world, Mac plays portical games, haphazardly studies for the Imperial Exam, and dreams of becoming a mecha pilot. Only problem: Mac’s grades are terrible. His only hope is to pass the military exam and get into the prestigious mecha pilot training program at Berkeley Military Academy.

When his friend Hideki’s plan to game the test goes horribly wrong, Mac washes out of the military exam too. Perhaps he can achieve his dream by becoming a civilian pilot. But with tensions rising between Imperial Japan and Nazi Germany and rumors of collaborators and traitors abounding, Mac will have to stay alive long enough first…

Mecha Samurai Empire follows Makoto Fujimoto, or Mac, a young student whose only dream is to become a mecha pilot. In order to train himself for the simulation test portion of the Imperial exam, Mac plays a lot of video games with his friend every time he gets the chance. He is quite good at it, however, to enter the university of his dreams, he also need to excel in the theorical part of the exam. Being a pretty average student, he knows he’s probably not going to be able to reach his dreams,at least, not without a miracle.

A few days before the exam, his best friend Hideki informs him that he has find a way for them both to obtain good scores: he has heard of a way to cheat that will be undetectable by the Empire. Mac knows it is probably is only chance but after thinking about it for a while, he decides that he doesn’t want to cheat even if it might be his only chance.

Come the day of the test and Hideki’s plan goes terribly wrong as the technology given to him to cheat is actually a hacking device made by the NARA, an organization of American rebels fighting for the freedom of the United States of America. Because of his link with Hideki who is now seen as a traitor by everyone, Mac not only fails the Imperial exam but he is now also on the radar of the Tokko, the Imperial secret service.

His only chance  to ever become a mecha pilot is to join the civilian pilot ranks and wait for an opportunity to arise. However, during his first mission, Mac finds himself in the middle of a fight that might spark a war between the United States of Japan and the German Empire that will change everything he ever thought about the war.

I read and I really enjoyed United States of Japan when it came out a few years ago so I was excited to read another story set in this world. Both works are standalone so you don’t need to read one to understand the other however, if you are intrigued by both novels, I would still recommend that you read USJ first. Indeed USJ as a lot more worldbuilding than MSE and it will give you a bit more context and explanations about this alternate history world and how it came to be.

Mecha Samurai Empire is a bit more contained and focused that USJ, it is narrated from Mac perspective and we only follow his journey as he grows from a very naive student to a cadet confident in his abilities. I have to say though that, out of the entire cast, Mac actually is my least favorite character, I found him a bit too passive and ignorant for my liking. The other members of his crew were a lot more interesting especially Kujira, Chieko and Nori. Kujira especially was a fascinating character and I would have love to follow his story and learn more about his past.

However, except for the main character, I quite enjoyed Mecha Samurai Empire, if you are looking for your daily dose of mecha action, this book has you covered! I’m sure it would make a great anime or action movie. Even if I liked it a bit less that United States of Japan that I found particularly original and different, I would still recommend Mecha Samurai for those who are looking for an action-filled book with giant killer robots. And who wouldn’t?

I received a copy of this book from Wunderkind PR in exchange for an honest review. All opinions are my own.