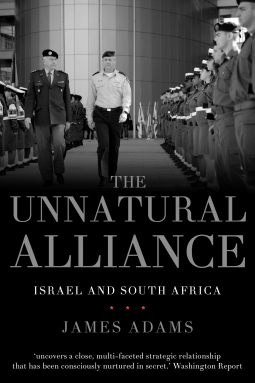 “A new and powerful influence has emerged on the world scene, involving two of the world’s most improbable allies…

James Adams gives the first detailed account of this strange alliance. He shows how, for very different reasons, the two states have become increasingly estranged from the international community and in their isolation have found new and unexpected common interests.

Israel has provided South Africa with vital help in military and espionage matters, and the two countries have forged close links in the arms trade, economic development and nuclear programmes.

But, most bizarre of all, this alliance has also won them new friends in black Africa. “

I don’t usually read nonfiction but lately I felt the urge to read some so I browsed the History category on Netgalley and I requested a few titles. I was intrigued by this title in particular because I didn’t even know that the alliance between South Africa and Israel was a thing and I’m always interested by things I don’t know about.

I studied a bit the Israeli-Palestian conflict in high school and it’s a subject that I found fascinating even though it is extremely complicated. Israel and South Africa are isolated countries in both geographic and ideological terms. This isolation is the main reason they work so well together, which may seems a little counterintuitive if we take in consideration that most their collaboration South Africa enforced Apartheid.

This book was fascinating, I thought that it was going to take me ages to read but no, it took me only three days. I’m a bit of a history nerd so it’s not that incredible but still. It was really impressive to learn how deeply but secretly those two countries worked together for such a long time, how they managed to trade arms, nuclear programs and money even when South Africa was in a supposed embargo.

The Unnatural Alliance was first published in 1984 so it’s not exactly up to date. Indeed, it only takes in consideration Apartheid South Africa (since it was abolished in 1991), I would have loved to see a preface or an epilogue that took this in consideration and made a link between how the situation was and how it is today. Also, because of how old the book is, some sentences were oddly disarming like for example when Adams mentions that the situation is so tense between Palestine and Israel that the conflict might takes ten years to solve itself. It was a bit optimistic if we take in consideration that, in 2016, it’s far from over. Also, at one point, the author mentionned that:

“The ANC [African National Congress] has now been operating since 1812, and at the present rate, ther is no possibility of it becoming powerful enough to institute change in South Africa”

This sentence now sounds completely obsolete since the ANC has been ruling South Africa since the election of Mandela in 1994. However, there again, it’s just because Adams couldn’t predict that in 10 years, South Africa would completely change, it’s just funny to see how he imagined our present.

I had a few issues with this book though, I liked how precise it was in term of economic and material trade but I would have liked to see a bigger part on the cultural aspect of their alliance. It was a bit discussed right at the beginning, but still, in my opinion, it would have improved my reading experience quite a bit because it wouldn’t have seemed so dense.

However, I really enjoyed the book, so much so that I spent quite a bit of time researching the elments that interested me the most while reading when I finished it. I will definitely be reading more nonfiction in the future!

I received a copy of this book from Netgalley in exchange for an honest review. All opinions are my own. My thanks to Endeavour Press.

One thought on “Book Review: The Unnatural Alliance: Israel and South Africa by James Adams”