Merry Christmast everyone ! I hope that you had a great a day and that you are all celebrating with the ones you love! 😀

I am here today to do a quick wrap-up of the short stories I read recently, some of them I read two months ago but I still wanted to mentionned so here they are! 🙂 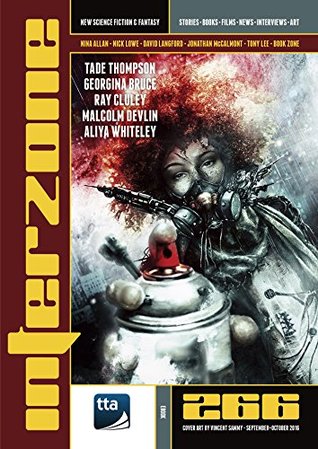 The Apologists by Tade Thompson 4.5*

I have been meaning to read some of Thompson’s work since I first heard of him when fis debut-novel, Making Wolf, won a Kitschies award last year and I saw that one of his stories was featured in this issue of Interzone, I was very happy. This story was amazing, I don’t think that I ever come across a tale as brutal and fascinating in a long while. It’s the story about the five remaining humans trying to rebuild Earth after an alien invasion. It’s bloody, terrying but you can’t put it down. Fantastic and highly recommended. I will be reading one of his novels soon.

This story was so unimpressive that it paled in comparision with The Apologists. It was so weird that I had to look a synopsis up online to remember what it was actually about, as it happens, this story is about an alien transmission whose meaning changes on the receivers. I don’t know how I managed to finish this one.

The Apologists was an excellent story but Sideways was an even better one. It was a mix of an historical fiction and a horror story about a test pilot who, towards the end of his life finally confess how his best friend, a fellow pilot assigned to fly a strange arrow shaped rocket, died. Like Thompson’s story this was fascinating in a dark twisted way. The writing was gorgeous and I will be reading other things by Cluley.

Three Love Letters From An Unrepeatable Garden by Aliya Whiteley 2.5*

Hum, after reading Sideways this one fell flat for me, the premise was quite good  but overall, I didn’t really see the point of this story. It follows a gardener that has to take care of a flower that no one is allowed to smell because of how special the smell is.

The End Of Hope Street by Malcolm Devlin 4.5*

This is such a quiet little horror story, it’s a very depressing tale about the houses in Hope Street that slowly became unlivable and how the different inhabitants dealt with the loss. I wouldn’t recommended reading this if you’re feeling a bit down because it is not going to make your day any brighter but it’s still a very good little story.

As always, Interzone managed to surprise me with some amazing stories. I really really enjoy this magazine because I always manage to find fascinating stories and great authors. It’s true that this issue was a bit of a mixed bag but it was so worth it for The Apologists, Sideways and The End of Hope Street that were for me three gems! I will be getting a subscription to this magazine next year! 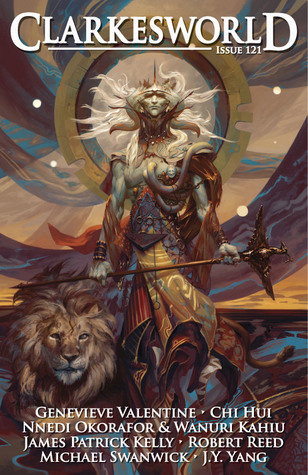 The Next Scene by Robert Reed 3*

What if AIs wanted to be entertained by humans melodrama ? That’s the idea explored by Reed in this very interesting and unique short story. I usually like Reed shorts but it’s true that I always have the same complain, I always think that the ideas behind his stories are good but I wish he explored them a bit more. The ending of this stry was really good but it could have expanded a bit. I want to try his novels to see if he has the same issue writing longer works.

This was my least favorite of the issue, its two main characters  are sisters and they live on a remote island where technologies are seen as evil and dehumanizing. The inhabitants of the islands are seen as tourist attraction but then one of the sister falls in love with a tourist and dramas ensues. It wasn’t particularly original and the ralationship between the two sisters wasn’t really present enough which made some of the dramas a little boring. For what it was, it should have been a lot shorter.

The Calculations of Artificials by Chi Hui 4.5*

This is a very depressing story about the consequences of human violence and our need of mutual destruction. Wonderful little gem but it’s pretty terrifying, chinese short stories usually are. 😛

Everyone from Themis Sends Letters Home by Genevieve Valentine 4*

What started out as what seemed a space colonization tale ended as something way different. This was probably even more depressing that the previous story. I didn’t really enjoyed the first part of the tale but when you realize it’s not what you expected at all, it became way more fascinating. Yes I know that this is an extremely vague blurb but you shoukd definitely go into this one blind.

Rusties by Nnedi Okorafor and Wanuri Kahiu 5*
Definitely my favorite of the issue, you should listen to the podcast of this because it’s going to turn this into a much more powerful experience. It’s about Nigeria, people, an AI revolution and love. It was so easy to relate with the main character and the writing was spectacular. The more I read Okorafor, the more I realize how much of a great writer she is.

Great concept but the execution was a bit lacking. It’s based on the idea that each building has a guardian, a caretaker that needs to be put down if you want to destroy the building. It was interesting because it’s set in Singapore and this context is really important to the story but it could have been so much more in my opinion.

The Very Pulse of The Machine by Michael Swanwick 4*

What started as pretty meh really ended in a suprising way. I don’t want to say too much about this because the “twist” is so amazing that it shouldn’t be spoiled. Let’s just said it’s about an astronaut stranded on Io who starts to hear voices coming from her dead friend’s body. If that doesn’t intrigue you I don’t know what wrong with you ! 😛

Overall a very strong issue really focused on AIs which is not surprising for Clarkesworld. After a couple of meh months, I stopped my subscription but I might start it again if next year if the next issues are as good at this one! 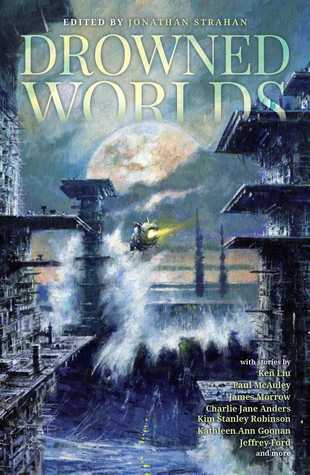 I have been reading this for months now and I really don’t care about this anthology. Out of the eight or nine stories that I’ve read, I only enjoyed two, the other ones were just meh or boring. I have tried to pick it up several times but it never managed to grab my attention and so far, having this one my Currently Reading shelf only has prevented me to start other anthologies because I absolutely wanted to finish this one.

The themes and ideas were interesting on the paper but the execution wasn’t there for me and I don’t want to force myself to finish it. The only two stories that I would recommend are The Last Gods by Sam J. Miller (because this guy can’t write a bad story and The Last Gods was excellent) and Destroyed By The Waters by Rachel Swirsky which was a beautiful story about love and loss.

I don’t have many stories left so I might try to finish this but not today or anytime soon.

That’s all for me today ! Don’t forget that you can read or listen for free to all the Clarkesworld stories mentionned here 😉