My goal is to read the shortlist before July 18th, the day of the 2018 Award Ceremony. So I don’t have much time to read and review the last four books but I will do my best!

You can find more thoughts about my reaction to the shortlist here and about my predictions here. 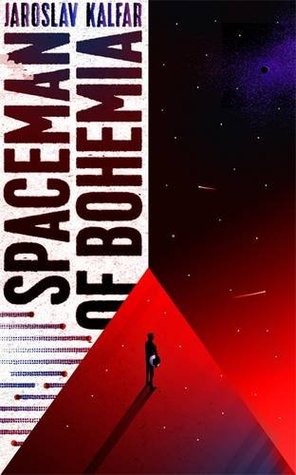 A proud nation witnesses Jakub Procházka’s ascent as he launches skyward from a state-owned potato field to become the first ever spaceman of Bohemia.

He thinks he has escaped terrestrial problems – from his father’s legacy as a brutal communist informer to his wife, Lenka, whom he loves yet no longer understands – but he is wrong. Alone above the earth, his only solace comes in the form of a (possibly hallucinatory) arachnid with a penchant for existential philosophy and Nutella.

Museums across the world will carry Jakub’s likeness; schoolchildren will repeat his name for centuries to come. He came to space to tread the heavens, to grasp infinity.

But first, he needs to find a way home.

Spaceman of Bohemia follows Jakub Procházka, the first ever Czech astronaut, as he is sent in a solo space mission to collect dust from a strange dust cloud floating in space. However, when he enters the cloud, things don’t go as planned and he finds himself in a situation he won’t be able to escape by himself.

Does it give you The Martian vibes? The synopsis might but, if you are expecting Spaceman of Bohemia to be anything close to it, don’t read it. Sure the premise make it seems like this is going to be a suspensful space adventure but it’s not.

Does it make it a bad book? Not necesseraly. It’s up to your preferences and expectations. Reading this book made me realize a couple of things. First of all, setting your book in space doesn’t always make the book a science fiction novel.

Indeed, the focus isn’t on the mission or the survival aspect at all but mainly on the main character and the relationship he has with his family and his past. More than half of the chapters are about Jakub’s past, either his childhood in a small Czech village or his studies in Prague. Even the scenes taking place during the mission are all focused on his memories.

We learn early on in the novel that Jakub’s father was a communist informer and because of that, he was always seen as a traitor by the entire village. Because of this legacy, Jakub was violently bullied during his childhood and in order to break away from his father’s past, Jakub always tried to act like the perfect citizen. This mission is an opportunity for him to bring closure to what he thinks everybody think he is: an impostor and a traitor. Every decision he makes, he makes because of that.

I didn’t care much for the book but I have to say that a couple of things are done well. First of all, even if I really didn’t like Jakub, I found him self-centered, naive and socially incapable, he felt real. This book isn’t about space, it’s about Jakub as he struggles with his past, with love, the idea of love and the fact that the world isn’t solely working around him and his expectations. It’s about a lone man confused by his role in the society and the fact that people don’t always want the same as him as he slowly goes mad in the solitude and isolation of space.

Spaceman of Bohemia is an atmospheric novel deeply rooted in history and built around the past. This novel will immerse you in another culture, you’ll be able to see, taste and smell the streets of Prague and  you’ll be thrown off by the vast silence and solitude of space. I have been to Prague and I could perfectly picture the scenes while reading the book. Prague has a really unique atmosphere and I found myself revisiting it through the eyes of someone who grew up there.

However, despite that, I struggled quite a bit with this novel. I found a couple of scenes utterly unbelievable: Jakub finds himself in a lot of very dangerous situations and the way he survives are quite questionable to say the least.

A lot in this book didn’t make any sense, including the fact that he would be sent alone in space for month especially when, it is repeated times and times again that it’s not because of the weight since the spaceship appears to be loaded with useless things. I’m no astrophysicist but, I know that, in space, a kilo cost a lot. If that was the problem, I could have understand why he would be sent alone. However, we learn that Jakub was sent with a lot of hydrated food and several glass bottles of alcohol in space so, I don’t believe the weight was the problem here. My question then is: why would you sent a person mentally incapable of dealing with solititude in space alone?

In my opinion it’s because Spaceman of Bohemia simply isn’t a science fiction book. Kalfar didn’t make the story remotely believable because he didn’t care about that, it isn’t the point of the book.  Spaceman of Bohemia is not about space but about the spaceman. To be honest, you could set the entire story on Earth and nothing would change. That’s my problem with it being shortlisted for the Clarke.

I think I would have enjoyed this book way more if it didn’t try as hard to be what it’s not: a speculative work.

I really don’t understand why this was shortlisted. I bet it would be a stronger novel if it wasn’t set in space.