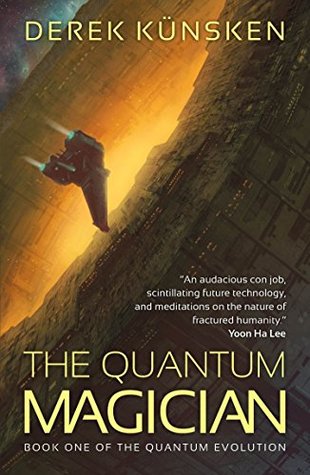 Belisarius is a quantum man, an engineered Homo quantus who fled the powerful insight of dangerously addictive quantum senses. He found a precarious balance as a con man, but when a client offers him untold wealth to move a squadron of warships across an enemy wormhole, he must embrace his birthright to even try. In fact, the job is so big that he’ll need a crew built from all the new sub-branches of humanity. If he succeeds, he might trigger an interstellar war, but success might also point the way to the next step of Homo quantus evolution.

Belisarius is a Homo Quantus, a man genetically modified to manipulate data on the quantum level. He was supposed to become a great scientist like all the others of his kind, however, he doesn’t like to follow the rules. He especially doesn’t want his whole career and life to be dictated by his genes, thank you very much.

What can you do with your life when you can compute data more efficiently than a computer? For Belisarius, the answer is simple: become the best con man of the universe. However, even for him, his last job might be too hard if not impossible.

He has to find a way to move a huge fleet of warships across an heavily guarded black hole while remaining unseen. His client, a small vassal-state of the Congregate, is dreaming of independence and is ready to start an interstellar war for it.

To succeed, Belisarius will have to pull off the biggest heist of the galaxy and he cannot do it alone. He needs a crew and a talented one at that. Who could be better than the craziest representant of other subspecies, an AI who thinks he is the reincarnation of a Saint and another Homo Quantus? At worse, they’ll kill each other off, at best, they’ll be richer than they’ll ever be!

Set in a future where humans have modified their genes in order to survive in hostile environments, to improve their skills or to turn other species into their slaves, The Quantum Magician is one crazy ride. Derek Künsken has enough ideas to write dozens of books but he uses them all in one. It’s a crazy imaginative story which managed to pick my interest from page one. It’s thought-provoking, very clever and extremely enjoyable. When I finished a chapter, my immediate thought was “Okay, just another one” and it doesn’t happen that often for me.

The worldbuilding is amazing, this book is packed with fascinating ideas and I had a blast discovering how humanity evolved by discovering all the new subspecies. I was morbidly fascinated by the Numens who modified their DNA in order to enslave the Puppets and how horrible it turned out for them.

Belisarius is very interested by those modifications and how much it redefines the meaning of being human. Being a member of a subspecy himself, he cannot help but to question where his own actions are coming from. Is he motivated by his own free will or are his actions predetermined by his genes? This naturalistic approach of life is at the center of the book and some characters even discuss it at various points in the book. Don’t worry, it never turns into a boring lecture,on the contrary, it allows us to understand the motivation of both protagonists and antagonists.

The Quantum Magician is a fabulous debut, it would make the most fantastic movie. It has everything and more, it seriously needs to be read by way more people. Highly, highly recommended.

I received a copy of this book from Solaris in exchange for an honest review. All opinions are my own. My thanks to Rebellion and Netgalley.

13 thoughts on “Book Review: The Quantum Magician by Derek Künsken”