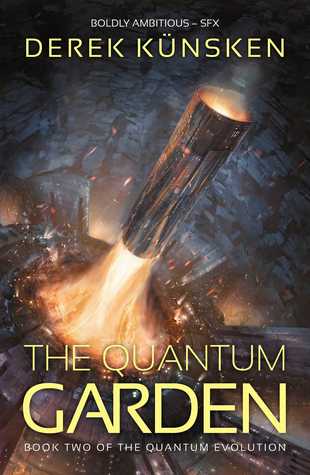 Days ago, Belisarius pulled off the most audacious con job in history. He’s rich, he’s back with the love of his life, and best of all, he has the Time Gates, arguably the most valuable things in existence. Nothing could spoil this…

…except the utter destruction of his people and the world they lived on. To save them, he has to make a new deal with the boss he just double-crossed, to travel back in time and work his quantum magic once again, tracking down the source of the wormholes.

If he can avoid detection, dodge paradox and stay ahead of the eerie, relentless Scarecrow, he might just get back to his own time alive.

The Quantum Garden starts a day after the end of The Quantum Magician: Belisarius and his band of misfits pulled off the perfect heist and managed to transport a bunch of armed starships through a wormhole.

Belisarius is now in possession of the Time Gates, he’s immensely rich and finally reunited for good with his childhood sweetheart. His life couldn’t be any more perfect, at least, up until he realizes his home planet is going to be nuked for what he did. His only way to save his people is to go back in time and work with the people who want him dead.

I read The Quantum Magician back in 2018 and it was one of my favorite books of the year. It was the perfect read for me: clever with great characters, a cool worldbuilding and a whole lot of fun! The Quantum Garden has the exact same elements, it starts off with a bang (metaphorically and literally!), it’s fast-paced and it manages to be both clever and entertaining. It was a pleasure to revisit the world and the characters. The time-travel element of the story was done very well and it gave an extra edge to the story. Indeed, to avoid a grandfather paradox, Belisarius and his crew have to make several difficult decisions and it made the book even more exciting.

The Quantum Magician was fascinating because it introduced the world, the different human species and the cast of characters. Because of that, I was a bit apprehensive about the second book, it’s not always easy to keep the attention of readers when they don’t have the “newness” factor of the first book. However,  I didn’t find The Quantum Garden any less exciting than the first book. On the contrary, since I didn’t have to focus as much on the worldbuilding, I had more fun following the characters.

I especially liked two characters that had minor roles in the first book: Sergeant Iekanjika and the Scarecrow. I found Iekanjika super badass in this book, she takes no shit from anyone and she was always there to put Belisarius back on the right track when he was too preoccupated by his quantum experiments to focus on the heist. She had to make a lot of difficult choices in this book and, each time, I understood exactly where she was coming from. As for the Scarecrow, while he’s supposed to be one of the bad guys, I was fascinated by his backstory and I wanted more scenes from his perspective. And while I’m praising the characters, I have to make a special mention for Stills. All of his scenes were amazing, he’s so angry all the time but he sure has a lot of punchlines and insults to throw at the right moment! 😀

I don’t know how long this series is going to be but, I hope for many more books! It’s imaginative, full of cool quantum stuff and a lot of fun. If you have not read the first book already, you definitely should!

Four and half stars.

I received a copy of this book from Netgalley in exchange for an honest review. My thanks to Solaris. All opinions are my own.

11 thoughts on “Book Review: The Quantum Garden by Derek Künsken (The Quantum Evolution #2)”