Here are the stories I loved the most in March! You can read all of them online so, if some of them look intriguing to you, give them a try! 😉 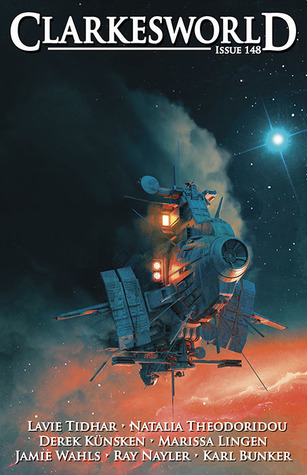 The January issue of Clarkesworld was amazing and it was hard to make a selection of my favorite stories! Since I enjoyed all the stories, I’ll briefly mention the ones that didn’t make “the cut” . Lavie Tidhar’s Venus in Bloom is fantastic little story set in the Central Station universe. It’s beautiful, the prose is elegant and it left me in tears. One’s Burden Again by Natalia Theodoridou is about making hard decisions and how breaking habits can be hard, sad and yet, liberating. It’s weird but I think everyone can relate to it in some ways. Ray Nayler’s Fire in the Bones follows a robot uprising and how the creations can be inspired by their creators.

All the stories were fantastic but here are the four stories that I loved the most!

The Ghosts of Ganymede by Derek Kunsken

Last year, I read and loved Kunsken’s debut novel The Quantum Magician. It’s a heist story set in space, it’s a very clever book that both manages to be a lot of fun and complex! Because of that, I was excited to see he had a story in Clarkesworld, if I’m not mistaken, it’s his first appearance in this magazine.

It follows the exiled survivors of a nuclear conflict between Ethiopia and Eritrea. They both decided to move to Ganymede to mine helium 3 but, when they land on the planet, they realize that it is already inhabited by strange and alien ghosts. To survive, they’ll have to work past their cultural differences and find ways to build a new life on Ganymede.

It’s a great story, it discussed how wars change our perceptions of each other and how you sometimes have to make hard decisions in order to live and build a new life. I highly recommend this story!

You can read it here

Eater of Worlds by Jamie Wahls

An ancient sentient weapon seek to destroy a planet but things don’t go as planned when some parts of the weapon realize that they don’t want to destroy things anymore.

First of all, I never read a story build around a sentient weapon at war with itself and I loved how unique it was. However, what I loved the most about the story was the conclusion! I just wish it had been longer because a few elements could have been developed a bit more but, overall, I really liked the story!

You can read it here.

Left to Take the Lead by Marissa Linguen

After the destruction of her home-world, a young woman decides to work on a farm to pay off her debt. She has been is waiting for her uncle to regain the custody of her siblings for years, however, one day she realizes that if she really wants to see her family again, she should start taking care of things herself.

I loved how it discussed the fact that, a lot of time, we are the solution to our own problems. Holly’s emotional journey throughout the story was fascinating and I could see a lot of myself in her. Holly’s culture was also very interesting, she has a unique sense of family and it was fascinating to see what she thought of Earth.

You can read the story here.

They Have All One Breath by Karl Bunker

What would happen if AIs solved all of humanity’s problems?

It started with the end of all wars, and of all of crimes. However, it didn’t stop there, the AIs decided to control who was stable, educated, wealthy enough to be allowed to have children.

This story is about how humans would react to this intervention, would they be able to give up a part of themselves for the greater good? It was very interesting, I especially loved to see what people’s perceptions of the AIs actions changed the more it affected them directly.

You can read the story here. 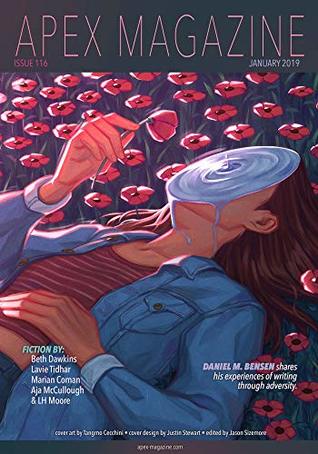 The Pulse of Memory by Beth Dawkins

Set on a generationship, The Pulse of Memory follows a teenager as he completes a strange ritual. He has to eat a fish containing the memories of an elder who passed away. The memory he’ll absorb will define the tasks he’ll have to complete on the ship. However, the protagonist secretly eat more than one fish in the hope of finding the memories of his grandmother. The story follows him as he starts to lose himself in the memories of others.

The writing was superb and I loved how it discussed how some people deal with loss. I would love to read a full length novel set in this world!

What story sounds the most intriguing to you? Have you read any good short stories this month? 😀